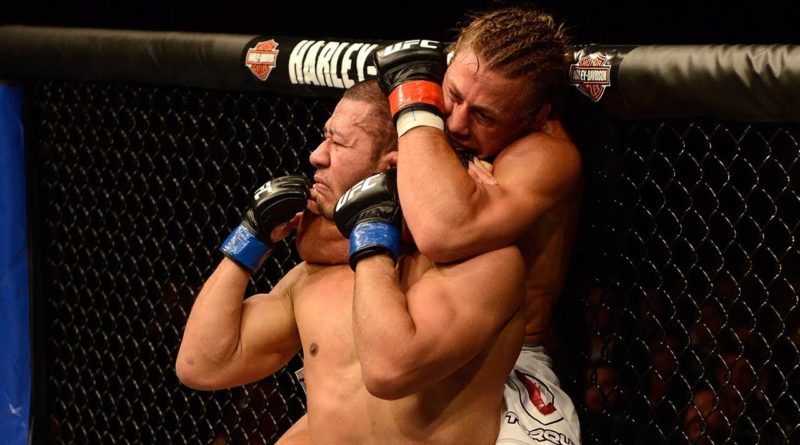 The Rear Naked Choke is one of the most common submissions in MMA but seeing it come from a standing position is significantly less likely. The above video starts with Jan Blachowicz countering a takedown attempt by Devin Clark and reaching over his back to lock up the choke, getting the tap only seconds later at UFC Fight Night 118. It’s no surprise that it doesn’t take long before this video features Charles Oliveira, proud owner of the most submissions in UFC history.

Oliveira has featured heavily on UFC submission collection videos, being in the compilations of the best Standing Guillotine finishes in UFC history, and the best Triangle Chokes in UFC history. He features in this compilation submitting both All American Wrestler, Efrain Escudero and ex-Bellator World Champion, Will Brooks. Then we move on to Michael Chiesa submitting Beneil Dariush at UFC On Fox 19, who catches the choke as Dariush stands to defend his first attempt at a fulcrum choke similar to the technique Khabib Nurmagomedov used to finish Conor McGregor.

The compilation also features UFC Welterweight Champion Matt Hughes defending his title against Frank Trigg to complete his five-fight run as champion, a title that he won by returning Carlos Newton to earth in one of the most well-remembered slam knockouts in UFC history. The video also features another double-feature courtesy of Rose Namajunas who earned both of her finishes over Angela Hill and Michelle Waterson in the build-up to her turn as UFC Women’s Strawweight World Champion.

For those of you looking to learn how to defend both the standing and grounded Rear Naked Choke effectively, click here to let Dean Lister show you.