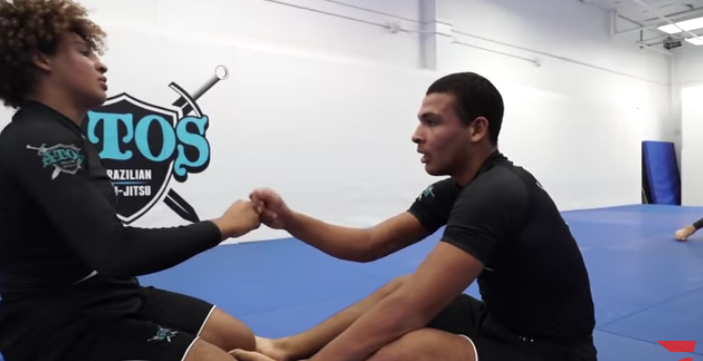 Twin brothers Kade and Tye Ruotolo are 18-year old jiu-jitsu phenoms that are already comfortable competing and winning at the highest levels of the sport. What’s more, they’re two of the most exciting grapplers on the planet, known for their all-action, all-aggression style that lends itself well to submission-only formats. It makes sense, then, that their rolls in the gym are entertaining. In a recent video, we get to see the Ruotolo brothers rolling at Atos Academy in San Diego, CA.

It might be surprising to some that many of the most entertaining exchanges in the video happened on the feet; both brothers are good wrestlers that blend takedowns into submission attempts seamlessly.

Both Kade and Tye Ruotolo are accomplished competitors, and both are brown belts under Andre Galvao at Atos.

Tye Ruotolo has competed twice this year, first with a dominant late-notice victory over William Tackett, and next in a hard-fought decision loss (again on late notice) to Craig Jones. Kade Ruotolo has competed three times in 2021, first with two spectacular submission wins over Ethan Crelinsten and Cole Franson, and most recently in an ultra-entertaining loss to Roberto Jimenez at The Road to ADCC.