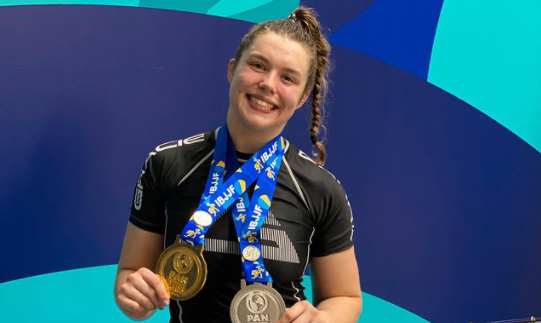 At the 2021 no-gi Pans, Kendall Reusing further established herself as one of the best black belt competitors in the world, as she took home gold in the super heavyweight division. Now a week removed from that performance, Reusing is sharing the details of a back clinch takedown she used at the Pans. Check out the video below.

The takedown is a perfect example of Reusing’s style — a blend of high-level wrestling on the feet and world class jiu-jitsu on the mat. As she demonstrates in the video, the takedown works well for jiu-jitsu because the top player can avoid landing in the guard. And because the takedown isn’t a high amplitude throw that requires a great deal of power, it will work for all body types.

A Gracie Barra representative, Kendall Reusing was a was a weight and absolute no-gi world champion as a black belt in 2019. At the 2021 no-gi Pans, Reusing won her weight division with a win over Mayara Custodio. In the absolute division, Reusing lost in the finals to Elisabeth Clay.