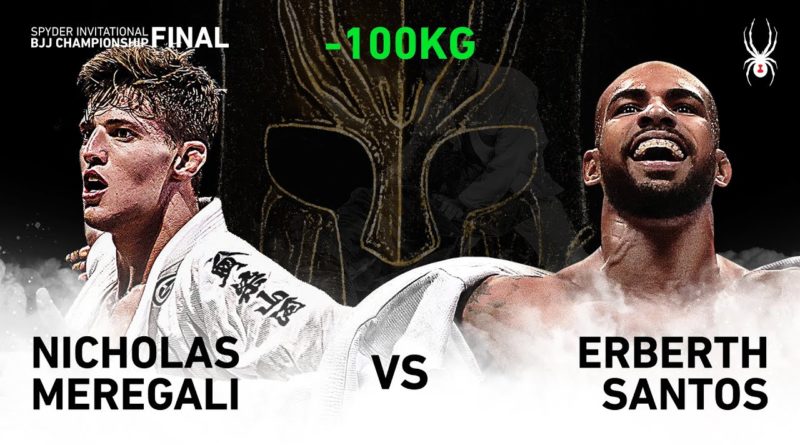 Nicholas Meregali scored a controversial victory over Erberth Santos in the semi-finals of the Spyder Invitational 2019 -100kg Tournament. The finish was controversial more down to Santos’ actions surrounding the tap as opposed to anything that Meregali himself did. This is hardly groundbreaking, as Erberth Santos has been the source of controversy more than once in his competitive career.

The match itself started pretty quickly with Meregali pulling guard and immediately working his De La Riva guard. Santos did well to avoid a sweep attempt and deal with the De La Riva hook, eventually settling to his knees in a Collar and Sleeve open guard. While he continued working to break Meregali’s grips, Santos stood and was immediately swept onto his back with beautiful work from De La Riva again.

Meregali came up to start working his passing game and made it to Half Guard before Santos attempted a sweep of his own using an underhook, but Meregali maintained top position. Santos attempted another Half Guard sweep but with more success, leveling the score at 2-2 just before the halfway mark of the match. Meregali attempted another sweep and as the pair scrambled for top position, Santos pulled off a beautiful flying Omoplata and locked up the position tight.

He then used the Omoplata position to switch to a Toe-Hold that Meregali defended expertly. This is where the match took a strange turn as a minor clash between Meregali’s knee and Santos’ chin while he escaped the position seemed to upset Santos. The two exchanged some words as Meregali settled into Side Control and Santos started to talk to the referee as well.

Meregali seemed confused and a little frustrated by this as he paused and looked at the referee for confirmation. The referee then penalised both athletes for talking to him during the match, a clear signal that he saw no reason to stop the fight. Meregali then carried on working from Side Control but it seemed as though Santos had had enough and did not want to carry on competing. He allowed Meregali to switch to Full Mount with no resistance, then allowing him to lock up an Ameriana grip as well.

At this point, Nicholas Meregali didn’t even have the Americana at full extension before Santos decided to verbally submit. Meregali then spoke to his corner and seemed visibly annoyed at the outcome of the match, before being followed by Santos as the two exchanged words. It didn’t seem heated between the two and they embraced after the match but the finish itself was very strange indeed.

The rest of the matches from the Spyder Invitational 2019 can be seen here.