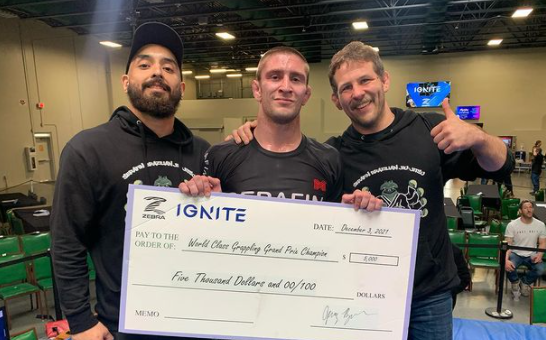 In a relatively light weekend of jiu-jitsu and submission grappling competition, a handful of top competitors picked up big wins. Most notably, ADCC veteran Oliver Taza impressed by winning the absolute division of the no-gi IBJJF Nashville Open, while the fast-rising Chris Wojcik picked up a victory over former ADCC Trials winner and established world-class competitor Gabriel Almeida.

In Nashville, no-gi world champion Johnny Tama found success in the gi, winning gold in the middleweight division with a win over Oliver Taza in the final. Also of note, Alliance’s Austin Oranday defeated Clay Mayfield in the final to capture middleweight gold; Oranday seems to be picking up steam and will be a competitor to watch this year.

In no-gi action, ADCC veteran and recent ADCC Trials winner Oliver Taza bested a tough field that included Mayfield to win gold in the absolute division. One of jiu-jitsu’s most active elite competitors, look for Taza continue to compete (and succeed) more and more in the coming months as he prepares for his third ADCC Championship.

The Rio Open was relatively light on big-name competitors. In women’s black belt action, Gabi Pessanha continued her run of complete dominance, winning both the super heavyweight and open class divisions. Pessanha’s only losses at black belt have come against Yara Soares — a woman she has beat the past six times they have met.

Serafin BJJ product Chris Wojcik turned heads at the ADCC West Coast Trials earlier this month; the unseeded Wojcik defeated both Kody Steele and Kieran Kichuk on his way to the semifinals. He picked up another big win over the weekend at the Ignite Fights eight-man grand prix where he defeated world-class black belt and former ADCC Trials winner Gabriel Almeida in the final.

The tournament win earned Wojcik a $5,000 purse. With his strong showing at the West Coast Trials and now another win over one of the sport’s best competitors, Wojcik seems to have arrived as a mainstay of the elite competition scene.