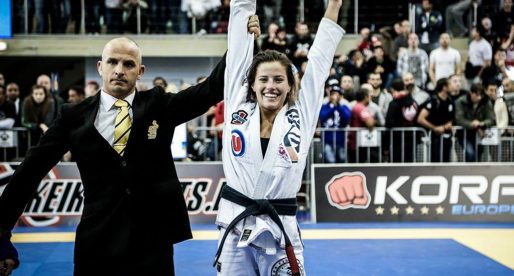 Washing your hair can be an annoying one. Especially if you train a lot.

Because BJJ is such an intense sport, you’re not only covered in your own sweat, but everybody else’s too. You shower after every session, and unless you want to sacrifice washing out your hairs nutrients and natural oils, you can’t be washing it every day. This is subjective, but after all, it’s only going to get sweaty later on anyway! For black women, there is a great article explaining the pros and cons of BJJ on your hair.

Hair will get pulled out (or sat on). Your hair is likely to be a lot shorter underneath because of it (obviously) being torn out. This happens because your hair is in the way of your neck and head, and a lot of moves are targeted in that area.

Men with longer hair will also experience this. However, some women just shave the underneath of their hair to prevent this. If your hair isn’t long enough to put up, then you’ll just have to deal with it being everywhere for now.

Shelly Doyle shares three hairstyles that help to keep her hair secure while rolling – in the video below. In my opinion, plaits are the best.

If you’re a woman who does grappling and also likes her fake tan, you will know the struggles of practically revolving your life around training and tan days. Obviously, when you train, you sweat so your tan comes off, and of course the frequent showering also plays a part.

Therefore, you have to plan a day in the week whereby you can exfoliate and do your tan so you can enjoy it for one day at least! P.s. Sorry to everyone who has been a victim of the fake tanned gi!

Amongst the amount of clothes you wear, washing your gi, sports bras, and no-gi stuff too means you’re burning money away on detergent and spend most of your time washing your clothes. However, the positive is, that at least now you’re a professional when it comes to washing and drying.

NAILS NAILS NAILS! For starters, when you’re a woman in BJJ you have to accept that you’re not aloud nice nails. Fake nails? Forget about them. Long nails? They’re only going to get ripped off. Painted nails? If (like me) you choose the option of having chipped nail varnish 24/7? Go for it.

Toe nails are usually the worst. This one affects men as well. If you have long toe nails that aren’t trimmed, if someone stands on your foot when preparing for a takedown, they might split. Trust me, you will know about it. First you hear the crack, then you realise your toe nail has split all the way down the middle. Glamorous, I know.

And of course…periods. The paranoia of going to a gi class wearing a white gi when you’re on your period is very much real. Not to forget the cramps. Some may choose to skip class when they’re on – but can you blame them?