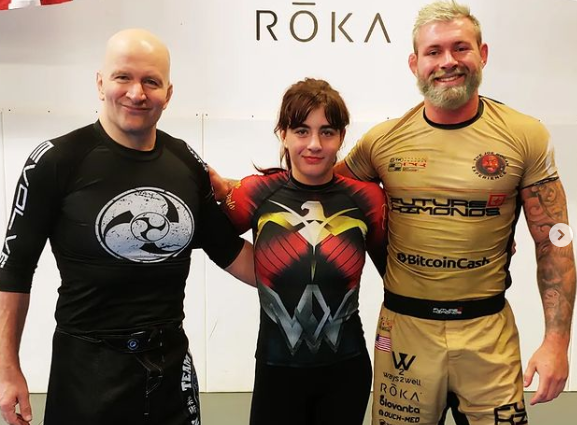 John Danaher, the owner of New Wave Jiu Jitsu and coach of the best No-Gi grappler worldwide, Gordon Ryan, has taken a new future champion under his wing; 15 year-old Helena Crevar. You have heard of the Ruotolos and their phenomenal rise to success at such a young age, and if you don’t know her already, you will be hearing a lot more about Helena soon. Ryan even gives a nod to her in his book, praising her for her marketing and branding techniques (her signature pigtails).

So far, Helena Crevar has trained under world champion Hector Vasquez in Las Vegas at Cobrinha BJJ Las Vegas. However, Helena and her parents have moved to Austin from Las Vegas to be able to train with one of the best coaches in the world – John Danaher.

Even though she is only 15-years-old and a blue belt in BJJ, she also has her own partnership with BJJ Fanatics releasing instructionals, and has an outstanding record for her age; out of her 151 fights she has won 148 and 130 of those wins were via submission. She is ranked 6th worldwide for the 145 pounds women’s division with 5 Fight 2 Win Championship belts and 4 Naga Expert belts.

Helena will be 16 in January and in the meantime she has won IBJJF PAN Kids 6 times, this year she won the ADCC for teens and so far, she already has 17 wins at Fight 2 Win, where she is the owner of the junior championship belt (she has already defended it four times). She started training jiu-jitsu at 8-years-old.

The teen prodigy also regularly competes against adult brown and black belts at superfights and NoGi trials, some of these women are among the biggest names in BJJ such as Elizabeth Clay who she fought during the 2022 ADCC West Coast Trial, and at the 2022 ADCC Las Vegas Open she faced seasoned competitor, Nathalie Ribeiro.

Danaher has graded a female black belt, but is yet to have a female champion. Could Helena Crevar change that?

“With this post, I’d like to announce that me and my parents just moved to Austin, Texas and that I will be training and competing under @danaherjohn @gordonlovesjiujitsu and the New Wave JiuJitsu team. I’m super grateful for this opportunity and looking forward to represent New Wave!”

In a recent interview for Jiujiteira Magazine, Danaher discussed the fact that he doesn’t have a female champion under him yet:

“On the face of it, one of the great failures of my career, thus far, is that I’ve never produced a female champion. And it’s natural to ask me: “Why?”

“Part of the answer is that I never engage into recruiting; I never actively “pull” people to the gym… I open the door and whoever comes, I teach. So, it tends to be a self-selected group of people that I teach.And the door is open two ways; to walk in and to walk out, and a lot of people walk out. My teaching style isn’t for everybody. Some people like it, some people don’t.”

He emphasized that he never pushed people to compete:

“In the gym itself, there is a pretty high number of females. But I never push people to compete. I was never the coach that would say: “Hey man, you’re good! You gotta go out and compete.” I’ve literally never said that. I never recruit and I never tell people they have to compete, and so what happens is that the people who compete, always do so by their own volition. So, I do have many female students. Some of them do compete, but I don’t actively push them to compete.

Nevertheless, Danaher believes that a New Wave female champion is an inevitability:

“I do believe that, inevitably in the future – as the number of female athletes increase – we will start seeing female champions. But I have never actively pushed for any one group of people to succeed in competition. So, it’s been a self-selecting process. The females who train with me are already achieving a good level of competence and one day they’re going to be successful in competition.”