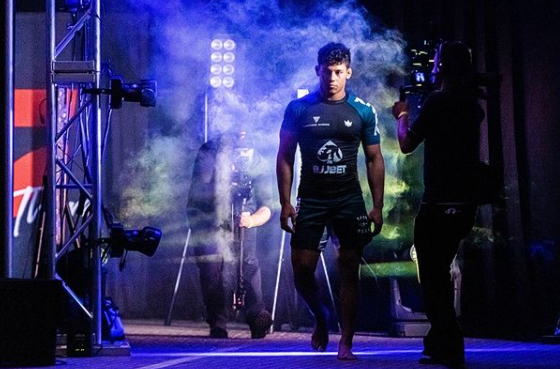 The middleweight division at the WNO Championships has been riddled with injuries and withdrawals, most notably the loss of divisional favorite Craig Jones. But with Jones out of the picture, the bracket is wide open, and a number of young talents are poised to establish themselves as one of the best competitors in the world.

Leading the charge is 18-year old Atos brown belt Tye Ruotolo. Although he’s undersized for the division, Ruotolo sets an incredibly fast pace and is a ball of constant aggression. He tends to do his best work when passing the open guard and hunting his trademark d’arce choke. Ruotolo is coming off a hard-fought decision loss to Craig Jones at the last WNO event. Despite that loss, Ruotolo acquitted himself well and showed that he is already a world-class grappler.

Roberto Jimenez holds a pair of points wins over Ruotolo and might be one of the only competitors able to match Ruotolo’s breakneck pace. Jimenez tends to do his best work from the closed guard, where his arm drag to the back can often seem unstoppable, but make no mistake, Jimenez is a pure submission-hunter in all areas of grappling. He recently submitted Kade Ruotolo at The Road to ADCC, and he’ll surely look to use the same approach against Tye, should the pair meet.

Perhaps the most intriguing player at middleweight is 17-year old Mica Galvao, who made the move to the United States earlier this year and has been setting the jiu-jitsu world on fire ever since. Long known for defeating established black belts as a teenager, Galvao has impressed in a pair of WNO matches this year with wins over Andrew Tackett and Oliver Taza. Galvao is a physical specimen, but more than anything, is a technical wizard that does his best work when countering his opponents’ aggression. That countering ability should serve him well against the ultra-aggressive competitors at middleweight.

Rounding out the group of young phenoms is 20-year old William Tackett. A black belt representing Austin’s Brazilian Fight Factory, Tackett often competes against larger competitors, and he may look to use his physicality here. He is an excellent leg locker, and despite losses to Ruotolo and Jimenez, has all the potential to make it deep into the tournament.