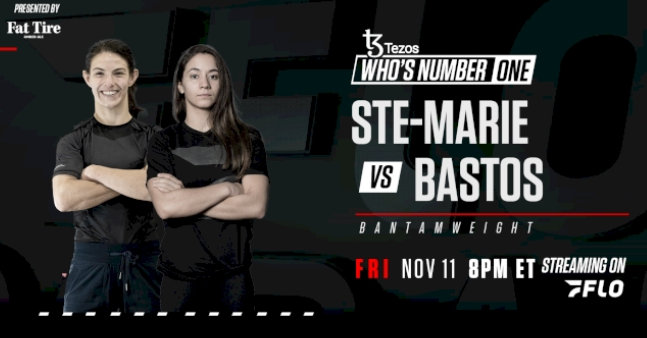 The headliner saw Ste-Marie pick up one of the biggest wins of her still-young career. The Canadian put on a strong showing of positional control throughout, working to pass Bastos’ vaunted guard in the first half of the match before finally achieving the back take in the final half.

From there, Ste-Marie kept dominant position, able to force Bastos on the defensive for minutes on end, earning her the clear-cut decision.

And in the co-main event, Jacob “The Hillbilly Hammer” Couch made quick work of Gracie Barra representative Bruno Matias. Couch immediately sat to open guard, but quickly pulled Matias into a closed guard where he secured a match-ending arm-in guillotine choke after just over two minutes of action.

Lower on the card, teenage prodigy Cole Abate earned a hard-fought decision over B-Team’s Damien Anderson in a high-paced, technical affair in which Abate showed off a mixture of leg attacks and trademark Art of Jiu-Jitsu back attacks.

Also, Luke Griffith needed under 30 seconds to land a heel hook on Haisam Rida, while Ethan Crelinsten picked up a rear-naked choke on Fabricio Andrey in one of the best performances of the Canadian’s recent career.