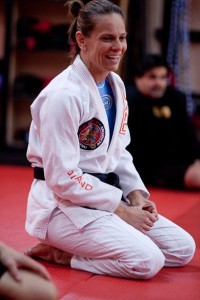 Brazilian Jiu-Jitsu (BJJ) shatters the concept about what a woman “should” or “shouldn’t” do. THIS GIRL CAN, AND SHE WILL. On the mats, everyone is equal; there is no gender. Being a woman in the male dominated world of Brazilian Jiu-Jitsu may seem tough at times, women in BJJ classes might be outnumbered ten to one.

However, BJJ is a sport that is meant for anyone and everyone – gender makes no difference in someone’s ability to learn and use BJJ.

In order to get more of an experienced insight into being a woman a man’s world, BJJ black belt practitioner and coach Valerie Worthington agreed to answer some questions.

Are Women Taken Seriously in BJJ?

Valerie began training in 1998. With nineteen years of experience in the martial art, she more than most people, knows exactly what it’s like to be a female in a male dominated sport.

Valerie states that she has been treated both the same and different as men, depending on the context.

“On one hand, men believe they have nothing to gain from training with, or taking a class from a woman, or they believe it’s wrong to train with a woman.”

“I am not responsible for, or interested in, changing the minds of people who fall into the former category. I’d much rather focus on training and learning with people who want to train and learn with me.”

The beautiful thing about BJJ is that it creates an even foundation whereby anybody can beat anybody. Jiu-Jitsu is a sport designed for weaker and smaller opponents to dominate larger ones using technique over strength. Women are most definitely not to be underestimated within BJJ. A 50kg woman who is a blue belt should easily handle a 70kg athletic man who is new to BJJ.

Some of the newer guys might be unsure about rolling with women, but those who have been around for a while will generally be good about treating you just as they would treat a man of your size and ability.

Is It Easier or Harder for Women in BJJ?

Being a woman in the male dominated world of Brazilian Jiu-Jitsu can be misconstrued by many to be more difficult, or easier, than being a man. But the truth is, it’s hard for everybody.

“BJJ is a tough road for anyone. Historically, it has probably been more difficult for women to gain inroads in Jiu-Jitsu simply because there have been fewer of us. Way back in the day, my presence at the gym simply did not compute for some people. Male or female” (“What is she doing here?” “Why is she doing that?”)

“Though, I must stress that there were also many men and women who supported me wholeheartedly.”

“Over the past few years, the amount of high-level female competitors in the sport has increased. Many of who I’m sure could give most men a run for their money.”

“For women, it can often be more difficult than it is for men to find similarly-sized training partners, opponents in competition, and acceptance in a Jiu-Jitsu community.”

But this is changing as more women not only participate in the sport, but show that women can be badass competitors, instructors, and ambassadors. The presence of women in the sport has always been a benefit; it’s just that more people are starting to realize it now.”

Benefits of Being a Woman in Jiu-Jitsu

Well first of all we have a less crowded training area… But like for anybody, jiu-jitsu has many benefits. Overall increased self-confidence is one of the first things you will notice, and you will develop a greater appreciation for what your body can do. Which can be refreshing in comparison to how much society focuses on what women’s bodies look like.

However, regardless of how confident you get in BJJ you will always have your down days. The sport is constantly evolving, and sometimes it may feel difficult to keep up with it. Even BJJ black belt Valerie agrees;

“Though I will say that sometimes, contemplating how little I know relative to how much there is to know, gives me a severe case of impostor syndrome.”