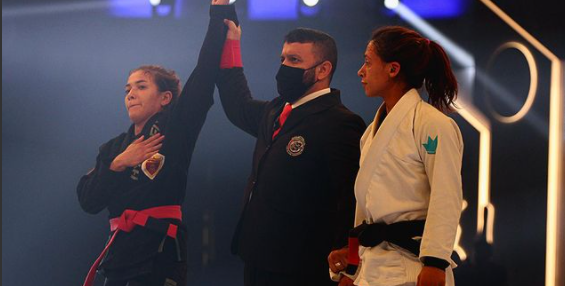 In women’s jiu-jitsu, 2021 was a year that saw the passing of the torch from accomplished, veteran competitors to the new generation of talent. Although she has been a black belt since 2019 and began competing as one in 2020, Anna Rodrigues experienced a break-out year in 2021, firmly establishing herself as the best in the world in her weight class while defeating a number of elite grapplers along the way.

Anna Rodrigues is our top female gi grappler of the year.

The leader of the women’s team on Dream Arts Project, Rodrigues lost just one time in 2021. She would avenge that loss later in the year.

Rodrigues began her year with success at the AJP World Pro, winning all of her matches but one — a decision loss to accomplished competitor Bianca Basilio.

At the 2021 Pans, Rodrigues needed just two wins to pick up gold, but one of those wins came against the highly accomplished (and would-be 2021 roosterweight Worlds champion) Mayssa Bastos. The win over Bastos was a sign of things to come, as Rodrigues would continue winning against elite competition for the remainder of the year.

After Pans, Rodrigues returned to compete at AJP, picking up a win over 2019 world champion Ana Schmitt, and avenged her loss to Basilio.

Rodrigues’ performance at the 2021 Worlds is not only the crowning achievement of her year, but of her entire career. After a submission win in her opening match, Rodrigues would square off with the highly touted Jessica Khan in the semifinals. Rodrigues impressed by submitting the Art of Jiu-Jitsu product with a collar choke from mount. And in the finals, Rodrigues bested 2019 world champion Tammi Musumeci by a score of 4-2.

In 2021, Anna Rodrigues stood out from the crowd in the ultra-competitive lighter-weight female divisions. And while she’ll certainly face plenty of challengers in 2022, she seems poised to rule her division yet again, establishing herself as one of the sport’s best pound-for-pound competitors.

A number of other gi competitors found plenty of success in 2021. Those include: