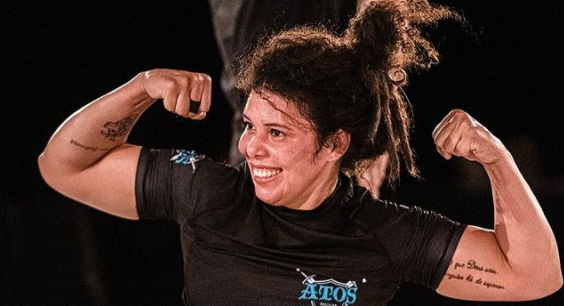 The women’s no-gi scene in 2021 saw veterans surpassed by newcomers as a handful of high-level grapplers pulled ahead of the competition. When comparing the levels of competition and number of elite wins, one woman stood out from the pack.

The 2021 female no-gi grappler of the year is Rafaela Guedes.

Guedes was awarded her black belt by Andre Galvao in September 2020, and couldn’t have asked for a better first year of competition as a black belt in 2021. She kicked off her year with a decision win over no-gi world champion Ana Carolina Vieira at Fight To Win 162 and followed that up with a submission win over Fight Sports’ Maggie Grindatti at Who’s Number One (WNO).

In May, Guedes helped carry Team Atos to victory at Subversiv 5, where she earned wins over Gridnatti again, as well as 2020 no-gi world champion Nathalie Ribeiro.

Next, at WNO, Guedes suffered her only loss of the year — an upset against Erin Harpe.

Guedes’ wins at the WNO Championships did plenty to set her apart from the competition, but it was her performance at the no-gi Worlds that established her as the best in the world. Guedes twice defeated no-gi Pans champion Maria Malyjasiak, Grindatti by submission, and Clay by a score of 10-0 to win both her weight class and the absolute division.

In 2021, Rafaela Guedes established herself a force to be reckoned with, and a competitor that could continue to dominate into 2022 and beyond.

A number of other no-gi competitors found plenty of success in 2021. Those include: