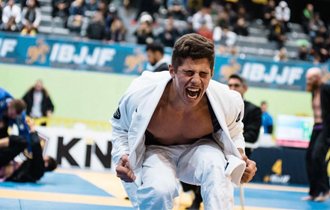 2021 saw plenty of rookie black belts making their mark at the highest levels of the sport. In gi jiu-jitsu, one rookie black belt not only surpassed his fellow new black belts, but had the best overall year of competition relative to any other male competitor.

That rookie is Art of Jiu-Jitsu’s Tainan Dalpra, who is Grappling Insider’s male gi grappler of the year.

After a colored belt career that saw him winning major IBJJF tournaments at every level, Dalpra hit the ground running in 2021, winning gold at Pans and Worlds. Looking deeper into those accomplishments, what sets Dalpra apart from the rest is the level of competition he consistently faced — and beat — throughout the year.

Dalpra began his year racking up gold medals at various IBJJF Opens; he conquered the Dallas, Houston, Orlando, Charleston, and Miami Opens, beating a mixture of regional, as well as elite-level competitors.

In June, Dalpra competed in the second Evolve Ur Game (EUG) grand prix, coming up just short in the finals against fellow rookie black belt Mica Galvao. That loss remains Dalpra’s only defeat of the year and as a black belt.

After EUG 2, Dalpra returned to the IBJJF circuit and his winning ways. At Pans, he erased any doubt whatsoever of his status as a world class competitor. In the opening round, Dalpra destroyed respected veteran competitor Italo Moura by a score of 29-0. Dalpra would defeat Yago De Souza in the finals to capture his first Pans gold as a black belt.

Dalpra ended his year by winning Worlds. The competition he would face and defeat there sealed his status as 2021’s top gi competitor; he won one of the most stacked divisions in recent memory. In the first round, Dalpra submitted 2021 no-gi Pans and Worlds champion Jeferson Guaresi. In the next round, he bested 2020 Pans champion Ronaldo Junior by a score of 8-4. In the semi-finals, Dalpra submitted European Open champion Tommy Langaker in a match of the year contender. And in the finals, Dalpra defeated 2018 world champion and top seed Isaque Bahiense.

In short, Dalpra is the best gi grappler of 2021 because he holds the most wins over the best competition. Dalpra did this with what has become the trademark Art of Jiu-Jitsu style: impeccable strategy, flawless technique in all positions, and precise, beautiful guard passing.

A number of other gi competitors found plenty of success in 2021. Those include: