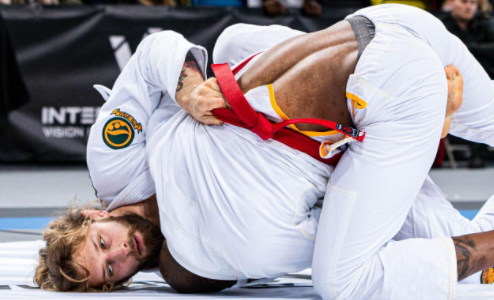 The 2022 IBJJF Pan-American Championships take place on April 6-10, with black belts competing on Saturday and Sunday. It is the first major North American IBJJF competition of the year, and has brought out most of the world’s top gi competitors.

From young talent on the rise to established champions, these are 10 competitors poised to do big things at the 2022 IBJJF Pans.

One of the most successful colored belt competitors the sport has ever seen, Thalison Soares is now living up to that hype as a black belt. The roosterweight won the 2022 European Open, but will face a more difficult bracket here. He has a potential semifinal showdown against 2021 no-gi world champion Estevan Martinez, and a possible final against Carlos “Bebeto” Oliveira. Soares has one of the most advanced guards and back-takes in the sport; watch that game put to test this weekend.

A 2021 Pans champion and Worlds silver medalist, Shane Jamil Hill-Taylor will look to reassert himself as the best featherweight competitor in the world after a stunning submission loss to Fabricio Andrey at the 2021 Worlds. And while Hill-Taylor won’t have the opportunity to avenge that loss this weekend (Andrey is not competing), he’ll have the chance to pick up some big wins. He’ll be looking forward to a possible matches against elite competitors like Kennedy Maciel, Diego “Pato” Oliveira, and Isaac Doederlein.

Diego Oliveira will join Hill-Taylor in the ultra-stacked featherweight division. A 2021 Pans and Worlds champion at light-featherweight, “Pato” will now test his skills up a weight class. Oliveira had an incredible year of competition in 2021 in both gi and no-gi, and the Unity Jiu-Jitsu standout will look to keep that momentum here. He is an all-around grappler that competes at a high pace, and there’s no reason to think his skills won’t translate to a higher weight class.

Grappling Insider’s 2021 gi grappler of the year Tainan Dalpra will aim to continue his dominance this weekend in a loaded middleweight division. The Art of Jiu-Jitsu product has lost just one time as a black belt — a referee’s decision against Mica Galvao. Otherwise, Dalpra has looked flawless and dominant, using his precise guard passing to win Europeans, Pans, and Worlds in his 18 months as a black belt.

Checkmat standout Jansen Gomes will make his major IBJJF black belt competition debut this weekend in the medium heavy division. Gomes was dominant as a brown belt, winning double gold at Pans and no-gi Worlds, as well as a gold at gi Worlds. He will look to test his excellent guard passing game against some of the world’s best black belts, including Leandro Lo, Murilo Santana, and Manuel Ribamar.

Poland’s Adam Wardzinski seems poised for a big year of competition. He started the year by capturing his first ever European Championship, and will look to carry that momentum into this weekend when he is the top-seeded heavyweight. A butterfly guard specialist, Wardzinski has ahead potential match-ups against current Who’s Number One champion Pedro Marinho and ADCC champion Matheus Diniz.

Dream Art’s Erich Munis has all the makings of long-time champion. The top-seeded super heavyweight was a 2021 world champion, defeating top-ranked IBJJF competitor (and the number-two seed) Fellipe Andrew in the final. Munis is an excellent and imposing athlete, but plays surprisingly well from his back. If he is able to make it through to the final, Munis is likely to face Andrew in a highly-anticipated rematch.

A current Who’s Number One champion, no-gi world champion, and ADCC medalist, Ffion Davies has been on a tear in the no-gi scene lately. But with all that success in no-gi, it might be easy to forget that Davies was a 2020 European Open double gold medalist; she is just as dangerous in the gi. Davies has a superb judo and takedown game to complement her elite pressure passing game. She’s the number-two seed in the lightweight division, and can look ahead to a showdown with Nathalie Ribeiro in the final (Davies holds one win in the gi, and one win in no-gi over Ribeiro).

Ares BJJ representative Elisabeth Clay is another competitor that is known for her exploits in no-gi competition, but has shown to be an equally dangerous gi competitor. A 2021 no-gi world champion, Clay placed second at the 2021 Pans, losing to Ana Carolina Vieira in the final. Clay is the three seed in medium-heavy division, but if she performs up to the lofty expectations attached to her, look for her to take gold.

Gabi Pessanha has appeared nearly unbeatable lately. Her 2021 campaign saw her win double gold at Worlds in addition her Pans championship. Picking up right where she left off, Pessanha captured double gold at the 2022 European Open. In the three-woman super heavy division, Pessanha will face either Mayara Custodio or Yara Soares in the final. Pessanha has never faced Custodio as a black belt, but is 11-4 head-to-head against Soares, and has won their last four encounters.

How to watch: The 2022 IBJJF Pans take place on April 6-10 and will air live on FloGrappling (subscription required).