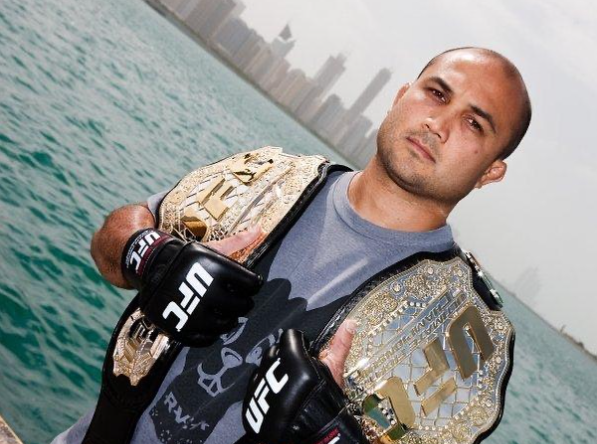 It’s no secret that BJ Penn’s base martial art was jiu-jitsu. He used that jiu-jitsu, coupled with excellent boxing and superb takedown defense, to win UTC titles as a lightweight and a welterweight. Now, Penn is weighing in on why another former lightweight champion — Khabib Nurmagomedov — never attempted to capture the welterweight belt.

The reason, says Penn, is jiu-jitsu.

“Since Khabib has been saying he is the greatest lightweight of all time and I am number 2 best lightweight many people have been asking me why didn’t Khabib fight Usman for the 170 pound belt or compete for 170 belt like I did many times… in my humble opinion it is because he is not proficient and confident in jiujitsu…” Penn wrote on Instagram.

Nurmagomedov captured the UFC lightweight title in 2018 when he defeated Al Iaquinta at UFC 223. He would successfully defend his belt three times before retiring from competition in October 2020 after defeating Justin Gaethje.

During his career, Nurmagomedov was a dominant grappler, using superb wrestling to gain top position where he would punish opponents with ground strikes or work toward a submission. While he was champion, Nurmagomedov was widely considered one of the top pound-for-pound fighters in the sport and one of MMA’s best grapplers.

Penn believes that Nurmagomedov never challenged for the welterweight title because his grappling style — Sambo — would not translate well against larger opponents. Throughout his career, Penn competed at a wide range of weight divisions from 145-pounds up to heavyweight.

I believe the reason behind Khabib not fighting Usman is because he does not know jiujitsu like I did and he is not comfortable fighting off his back against someone who is bigger and stronger than him like I did many many times in my career.
I fought at 170 185 and heavyweight and every fight I had to fight from my back and survive and come back and fight harder if I was to get a victory.

It’s because of my jiujitsu black belt 🥋 experience and fighting in my weight and absolute division for years that always prepared me for this…Gracie jiujitsu and Brazilian jiu-jitsu alone is not enough to be UFC champion but to choose one system BJJ is still the greatest self defense system in the world especially for the little man to fight the big man.

It was just part of the game…
Khabib says jiujitsu is easy and he is the best grappler ever but he did not fight bigger opponents in higher weight classes because his style is not prepared for this …and that’s what jiujitsu was created for.. for the little man to defend himself from the big man! That is martial arts, that is self defense !!