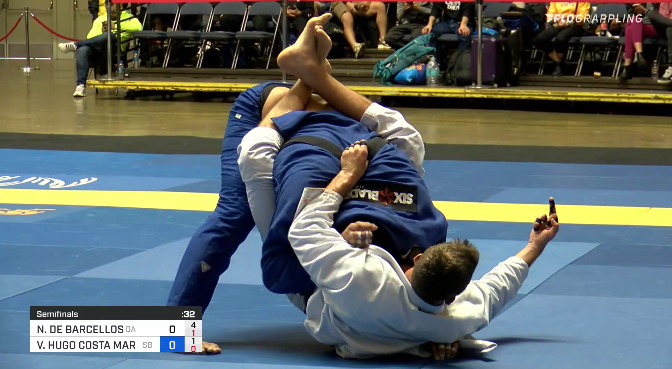 Going into the 2021 IBJJF Worlds, many predicted returning 2019 world champion Nicholas Meregali to take home double gold. Meregali seemed poised to do exactly that, winning his way to the finals of both the absolute and ultra-heavyweight divisions.

But in his ultra-heavyweight semifinal match against Victor Hugo, Meregali was seen giving the middle finger to a spectator during the match. And while that match continued with Meregali ultimately awarded the victory on advantages, that outcome was quickly overturned as Meregali was disqualified from the competition for unsportsmanlike conduct.

After the disqualification, Meregali spoke with FloGrappling to give his side of the story.

“Just that there was a guy on the sidelines that was talking crap to me the entire time,” said Meregali. “At the end of the match I couldn’t hold back and showed a finger to him. I was penalized. The referee didn’t disqualify, I got a penalty. Victor Hugo though it was him. He had slapped me twice in the face… I told him it wasn’t to do with him… I left the match upset. I cried a lot in the warm-up area. I’m tired of this situation, because every time I compete, even though I always put on a show. It always happens, the crowd is always against me. That’s normal but it’s not support against me. It’s offensive. It even feels like racism…

“I think in an event of this size a disqualification because of a gesture although there is rule about obscene gestures, I think it was totally excessive, unnecessary. I was in two finals, both weight and absolute, it didn’t need to be this way.”