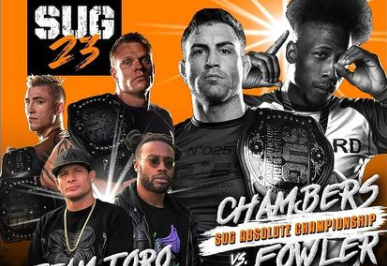 Fowler and Chambers exchanged wrestling techniques a bit on the feet before Fowler eventually secured a double leg slam that landed him in side control. From there, Fowler patiently moved to Chambers’ back, and once on the back, Fowler attacked a rear-naked choke. And even though Fowler couldn’t get his arm cleanly under Chambers’ chin, he squeezed nonetheless to earn the tap with less than a minute remaining in regulation.

“I got into that flow state, and I was being really aggressive,” Fowler said following the match. “I’m tired of people talking crap and saying I play smart and stall.”

With the win, Fowler has now successfully defended his title seven times.

Here are the full results and highlights from SUG 23.