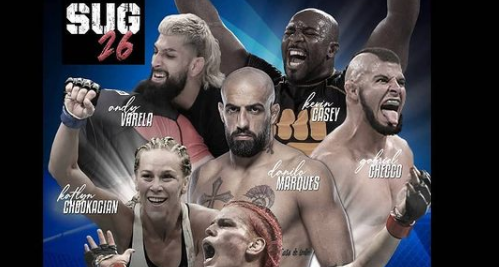 View the full SUG 26 card below.

Marinho is joined by Servando Almaraz to form team Gracie Barra, and they’ll be facing team Mat Mafia, made up of Alan Sanchez and Benji Silva.

The co-main event features a match-up between a pair of MMA veterans with ample ground skills. Danilo Marques is a 14-fight pro MMA veteran and is currently 2-1 in the UFC’s light heavyweight division. Gabriel Checco is 11-5 in MMA, but has focused his efforts on grappling lately, compiling a 4-3 SUG record since 2019. He last competed at SUG 22 when he defeated current UFC fighter Philip Rowe.

Although she’s typical thought of as a striker in MMA, Katlyn Chookagian will look to put her Renzo Gracie brown belt to good use against grappling specialist Gillian Robertson. Chookagian owns a single submission victory in MMA, but she has been a longtime student of Gracie in the famed “blue basement.” Robertson, on the other hand, is a grappler through and through, with six of her nine professional MMA wins coming by way of submission. Robertson last competed at SUG 23, losing to Raquel Canuto.

How to watch: SUG 26 takes place on Sunday, August 15 and will air live on UFC Fightpass (subscription required).