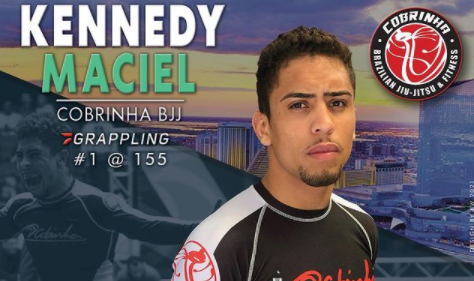 The Emerald City Invitational submission-only jiu-jitsu tournament is quietly becoming one of the best competitions of the year. On Saturday, August 7, the promotion will hold a 145-pound tournament with $10,000 on the line, and the field already features a number of the sport’s top competitors. Check out the current tournament line-up below.

Several names immediately jump off the page. Kennedy Maciel might be the tournament favorite; he is a Fight To Win champion, an ADCC silver medalist, an IBJJF no-gi world champion, and he holds recent wins over fellow tournament competitors Diego Oliveira, Josh Cisneros, and Gabriel Sousa. Maciel is scheduled to face Cisneros in a rematch later this month at Fight To Win 179, and their trilogy match could very well take place in the finals of this tournament.

Even if Maciel is the favorite, he’ll be a small favorite because the rest of the field is stacked with accomplished grapplers. Gianni Grippo, who was a 2018 IBJJF no-gi world champion, has quietly been one of the year’s more active competitors, and won the no-gi Pans. When he is at his best, Grippo can defeat any other grappler in the field.

Oliveira and Sousa are also two of the field’s most accomplished and currently active competitors. A 2021 no-gi Pans champion, Oliveira holds recent wins over fellow competitors Cisneros and Sousa. For his part, Sousa holds a recent win over Grippo and is coming off a spectacular performance against Danaher Death Squad representative Ethan Crelinsten.

Additionally, several competitors could easily play the role of dark horse. John Danaher brown belt Damien Anderson looked great in a submission win over fellow brown belt and tournament competitor Luis Quinones. Jon Calestine returns to competition after a two-year lay-off; he burst onto the scene in 2018 when he won EBI 15. Finally, never count out Estevan Martinez, who may be the field’s smallest grappler, but his willingness to compete in the absolute division across the board shows that size might not be a determining factor for him.

How to watch: The Emerald City Invitational 145-pound tournament takes place on Saturday, August 7, and will air live on FloGrappling (subscription required).