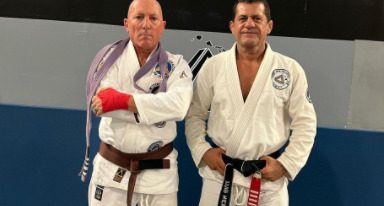 A rock icon has leveled up in jiu-jitsu. Last week, Tool lead vocalist Maynard James Keenan was awarded his brown belt in BJJ, placing him just one promotion away from the coveted black belt.

Keenan was promoted by professor Luis Heredia of Maui Jiu-Jitsu Academy. A black belt since the 1990s, Heredia is a multiple-time IBJJF Pans champion.

Keenan is best known for his work with Tool, a progressive and psychedelic rock band that has seen worldwide success over the past three decades. Keenan’s unique voice and lyrics have played a major part in Tool’s unique sound and acclaim. The band has won four Grammy’s, and won a Billboard Music Award for Top Rock Album for its 2020 album “Fear Inoculum.”

Additionally, Keenan has been the vocalist rock bands A Perfect Circle and Puscifer. Keenan has released four studio albums with each band.

Grappling Insider sends a big congratulations to Keenan on this accomplishment, and we look forward to seeing him awarded his black belt in the future.