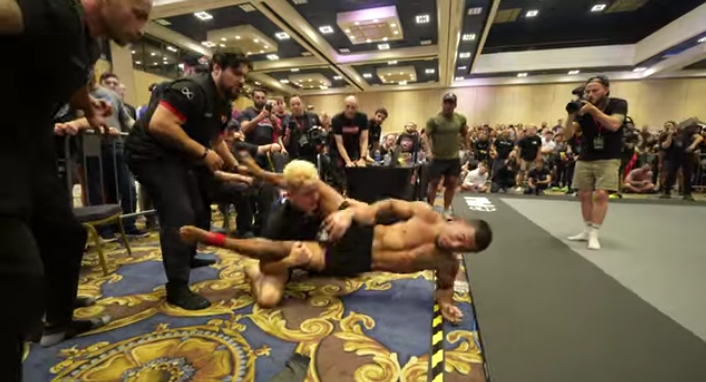 The 2022 ADCC West Coast Trials was the biggest Trials event ever and it produced countless memorable moments. Among those moments was the epic clash at 66 kg between The B-Team’s Damien Anderson and Brazilian Fight Factory’s Andrew Tackett. The match was one of the most entertaining of the entire tournament and is an early contender for match of the year.

Watch that full match for free below.

What we see above is an ADCC-rules match at its best. Both men fight hard for each and every position, with near constant exchanges of positional advantages and near-scores.

The most memorable moment of the match came during the overtime period, when Anderson and Tackett continued a wrestling exchange off the mat, running into the scoring table and disconnecting FloGrappling’s feed of the match in the process.

After an incredibly high-paced nine minutes of action, Anderson was awarded the victory by decision.

The younger brother to 77 kg. Trials champion William Tackett, Andrew Tackett is just 18-years old but already known as one of jiu-jitsu’s most exciting grapplers and best prospects. He is slated to compete on FloGrappling’s upcoming reality show “Who’s Next.”

Anderson is one of the top grapplers competing out of The B-Team. After defeating Tackett, Anderson would lose in the semifinals to eventual champion Kieth Krikorian.