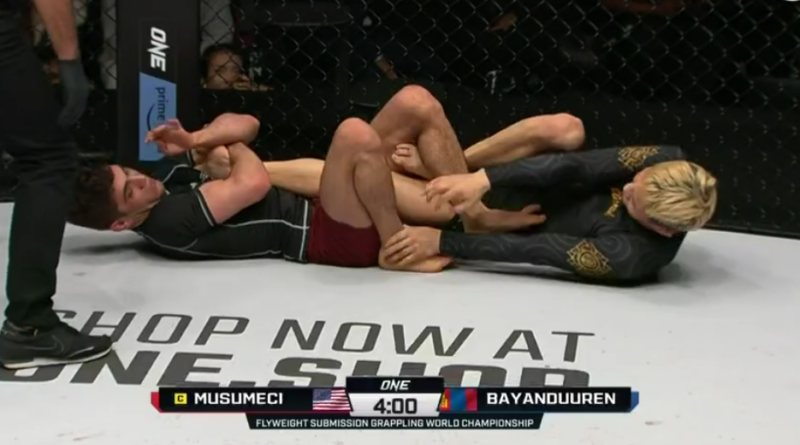 He didn’t score the submission, but at ONE Fight Night 6: Superbon vs. Allazov, Mikey Musumeci successfully defended his ONE world title in a truly dominant fashion.

On Friday, live from the Impact Arena in Bangkok, Thailand, the champion took on 2022 Combat Sambo world champion Gantumur Bayanduuren. The contest represented yet another chapter in ONE Championship’s submission grappling rivalry that pits jiu-jitsu against Sambo.

Unsurprisingly, Musumeci quickly pulled the Sambo player into his guard, and after nearly a minute of inactivity on the ground, referee Vitor Ribeiro returned the competitors to their feet.

Musumeci wasted no time in pulling Bayanduuren into closed guard again, but this time was able to attack an omoplata which led directly into a deep leg entanglement in Musumeci’s favor.

In a matter of seconds, the New Jersey native seemed to have achieved a fully-locked inside heel hook, twisting the challenger’s foot over 180 degrees. For more than five minutes, Musumeci continued to crank on Bayanduuren’s leg to contort it at a grotesque angle.

Several times throughout the match, Musumeci appeared confused as to why his opponent was refusing to tap despite undeniable damage to his knee.

With less than two minutes remaining in the contest, Musumeci released the leg to attack other submissions. And while the champion quickly achieved back control, he was not ultimately able to submit the durable but outmatched Bayanduuren.

Ultimately, Musumeci was awarded a clear-cut unanimous decision to retain his world title. The victory scored another point for jiu-jitsu over Sambo, extending BJJ’s lead to 4-0 in ONE Championship submission grappling matches.

Afterward, Musumeci commented on his opponent’s absurd toughness, stating that “His leg popped like 20 times. I’ve never felt somebody’s leg explode like that.”

The 26-year-old is now 3-0 inside ONE Championship, having captured the inaugural ONE flyweight submission grappling world title in September 2022 with a decision victory over Cleber Sousa.