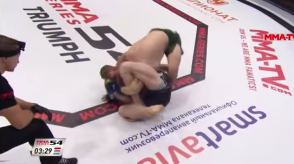 Knowing when to give up on a submission attempt is a critical skill in grappling. Professional MMA fighter Igor Konstantinov learned that lesson the hard way when, at MMA Series 54: Triumph, he broke his own arm while attempting a submission on his opponent.

Just over a minute into the fight, we see Konstantinov on his back in bottom side control attempting what can best be described as a modified buggy choke. But without the proper arm and leg placement, Konstantinov was unable to get the correct pressure on the choke. Instead, he squeezed so hard on the failed choke attempt that he broke his own arm just a few seconds into the attempt. After over 30 seconds of squeezing, Konstantinov lets go to reveal that he has a badly broken forearm, prompting the referee to call an end to the bout.

With the loss, Konstantinov dropped his record to 2-5 as a professional, while his opponent, Vasily Rudenko, improves to 5-0.