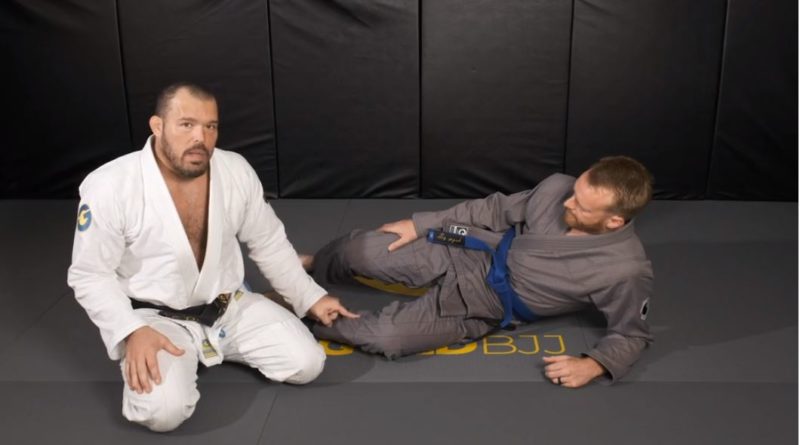 Even though Dean Lister has been around for decades, I feel like I’m just now discovering him after watching his new leglock course on Gold BJJ Online. Not only did I love the material in his hour long class, but but the end of it I found myself pulling up his old Pride FC fights and ADCC tournaments.

The truth is, while leglocks are kinda the new thing, they’re really not. Guys like Lister have been taking home people’s legs from tournaments since the 90’s or before. Heck, Dean Lister was kneebarring Saulo Ribeiro and heel hooking Alexandre Ferreira FROM THE 50/50 in 2003.

So I forked over $20 for Gold BJJ Online to check out the course. Actually, for $20, you get access to ALL of the courses, which is several hours worth of content and they are adding more all the time. With no contracts, it seemed like a safe deal.

I came away very impressed with the course itself, but also the slick platform that is Gold BJJ Online. I’ll be checking out (and possibly reviewing) some of the other content on it in the future.

But for now, here’s why I really liked, and recommend, Lister’s Leglock Course on Gold BJJ Online.

I have a thing about commitment. People are always trying to get me to watch this new show, or read this new book. I always tell them that if it’s longer than twenty minutes, it’s probably a no-go. And even though I love BJJ and train regularly, I honestly don’t have seven hours to sit down and diligently watch an instructional.

Lister’s course is fourteen videos long, and each is about five to ten minutes (all the Gold BJJ Online courses are structured like this). He shows a specific concept or technique, then it’s over. I like this. I found that could get to the gym ten minutes early and literally watch a video on my phone before heading in, having a clear idea of what I want to work tonight.

Dean also stays on topic. He doesn’t ramble or go of on tangents, which I found many veteran instructors are prone to do. He gives moves context and explains the logic behind things, but it’s short and to the point.

He Has Different Takes on Basic Attacks

There is a general consensus on the “right” way to perform basic foot and ankle locks. Dean breaks with conventional wisdom in a few of these, always carefully explaining his reasoning. It’s enough that you may rethink old habits. He also is careful to point out that most ways are neither right nor wrong, just different preferences.

In particular, Dean seems to plan his attacks to beat the most common counters, which is great for experienced players.

For example, Dean does not squeeze his opponent’s knee with his legs when finishing his ankle locks. He prefers to use his far leg in what he calls a “doorstop” to prevent them from rolling out.

Similarly, he doesn’t fall to his side on footlocks like most people are taught, he prefers to fall on his back, making it harder for opponents to “hop over” a leg and escape.

He Gives a Lot of Love to IBJJF Legal Leglocks

While this course definitely goes into heel hooks, toe holds, and kneebars. Lister teaches a considerable amount of the lessons in a gi, and focuses the first half of the course on foot and ankle locks that are perfectly legal in IBJJF. While heel hooks and knee bars are the hot ticket right now, Lister reminds us of some extremely powerful foot and ankle locks that can be dropped into without having to work into the Honeyhole or Game Over Positions.

This is great for people like me whom are not allowed to heel hook day one students (ridiculous, I know). It’a good reminder that taking away these submissions should not shutdown your overall game as a leg collector leg player.

He also talks about countering common defenses that gi players will employ, such as gripping your lapel of stalling you in the 50/50 position. Overall, he does a great job showing that leg attacks in the gi are alive and well.

Lister spends a few lessons specifically talking about strategies to put your opponents in the dilemma of defending a leg attack or getting their guard passed. He talks about potentially using leg locks as nothing more than a guard passing threat. Personally, I’m guilty of getting tunnel vision when chasing down legs, so this was excellent for me to remember passing is still a thing.

Ever since John Danaher credited Lister on the Joe Rogan Podcast for inspiring him to study more leg attacks, Lister has enjoyed some status as a pioneer of the art, even if younger competitors like Gordon Ryan and Eddie Cummings get the lion’s share of attention.

Lister seems to be very aware of this, and some occasional grumblings about “so called footlock experts” are actually kinda funny to me. Dean is a pioneer, and it’s fun to see his personality come through in some of the videos.

It’s Just One of Many Courses You Get at Gold BJJ Online.

Wrestling for BJJ, Advance Single Leg X, Knee on Belly. Gold BJJ Online has lots of other courses you get access to for just $20. There’s even a slick course on statistics from the guys over at High Percentage. There’s also no contracts, and you get a 10% discount on any gear you buy from gold while you subscribe.

If you want to check out the program for yourself, here it is. Now go heelhook some white belts err, drill with partners of an appropriate level.