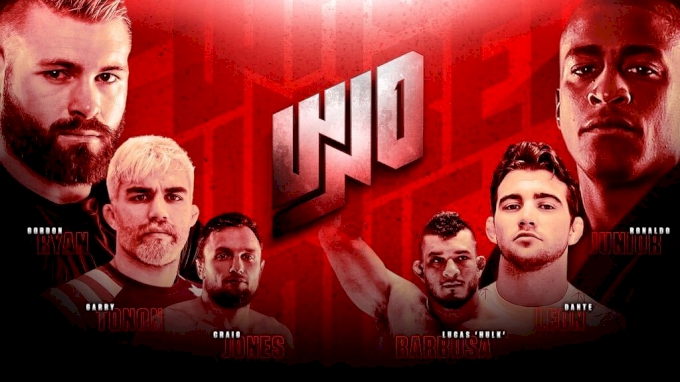 Craig Jones vs Lucas “Hulk” Barbosa has been added to the Who’s Numer One Gordon Ryan vs Ronaldo Junior card. This event features some of the strongest No Gi competitors in the game. The card will take place on July 31 in Austin, TX. Most athletes on the card have remained fairly active during the quarantine. With many appearing in events such as F2W, Third Coast Grappling and Who’s Number One.

Gordon Ryan will be returning to the mats to face his newly declared rival from Atos HQ: Ronaldo Junior. The news came out on Saturday via the official WNO account. They will square off in a no time limit, submission only, match. Ever the showman, Gordon said he would pay Ronaldo an extra $10k from his own pocket if Junior is able to submit him. I see Gordon attacking seated guard and Ronaldo blitzing to try and pass his guard with a high amplitude move.

It is hard to see Gordon losing in this ruleset. Even with the added motivation of the $10k there may be too much of a skill and experience discrepancy for Junior to overcome. It’s hard to know how Ronaldo has been preparing for this bout because Atos likes to keep their training tight lipped. However, we all saw Gordon looked like he hasn’t missed a beat when he recently defeated Kyle Bohem.

On Saturday Who’s Number One officials announced Garry Tonon will also be coming back to the the WNO stage. Tonon will face Dante Leon in a highly anticipated rematch of their ADCC 2019 bout. Garry and Dante have very aggressive, crowd pleasing, styles. Both competitors push the pace hard and fast. Fans can expect an action packed war for this rematch.

As his fans know Dante is a versatile grappler. He will battle on the feet, establish top position or pull his opponent into his solid guard if needed. Dante is known for his guillotine. However, Dante has recently shown some interesting triangle attacks as well. Meanwhile, Tonon is a scramble master. He thrives in the chaos of uncertainty. Though his style can appear appear less structured than his teammates’ Tonon is incredibly precise when the opportunity for attacks manifest. As the great Gilbert Burns learned: those with less than stellar leg lock defense beware.

On Wednesday 22nd, it was announced that Craig Jones will also be added to the Gordon Ryan vs Ronaldo Junior WNO card. Jones will be facing none other than Lucas “Hulk” Barbosa. This is a match up we have not yet had the pleasure of watching. Craig Jones vs Lucas Barbosa will undoubtedly result in an intriguing clash of styles. ADCC aficionados should pay attention because this may set the stage for a future ADCC absolute division matchup.

Upon entering the mat Craig seems to forget about being a quiet and amicable lad from Australia. Once his matches begin he becomes a relentless submission-hunting savage from Down Under. Meanwhile, Lucas Barbosa’s current competition strategy is primarily based around the IBJJF points based system. However, he will aggressively pounce on submissions if the oportunity arises. Barbosa is a bulldozer of a man and imposes a heavy, high pressure, game on his opponents. Craig Jones will have his hands full with Barbosa’s heavy handed pressure passing . We will likely see Jones trying to get to Lucas’ legs while the Hulk tries to pass and attack Jones’ upper body extremities.

This WNO card is absolutely stacked. It features three grapplers from the infamous Danaher Death Squad squaring off against three very game opponents. While many other sports have been put on hold, due to COVID, grappling fans are about to watch one of the strongest jiu jitsu events of the last year. The excitement is palpable. Enjoy.