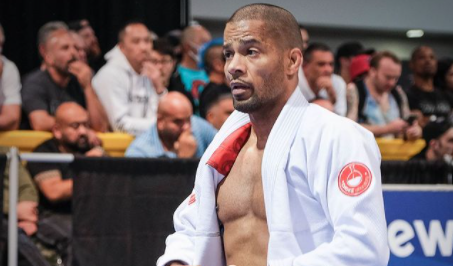 Josef Manuel is a fourth-degree black belt under five-time world champion Robson Moura and the owner of Cutting Edge Brazilian Jiu-Jitsu. Manuel recently appeared on the Open Guardcast to talk about his experience learning and training under Moura, as well as his own competition experience.

Manuel came to jiu-jitsu at the relatively late age of 28. Inspired by Moura’s brand of submission-oriented, modern and creative jiu-jitsu, Manuel spent most of his early years in jiu-jitsu competing as often as possible, culminating in a third-place finish at the 2011 IBJJF Worlds. While making the podium of an adult black belt division at Worlds is an accomplishment in it’s own right, Manuel did it well into his 30s.

I was promoted to black belt in 2009. February 14, 2009. And that’s when I said, it’s time, man, we gotta step into the big leagues… I was 37 years old on the podium, adult roosterweight category, black belt division in 2011… I would have made history if I won gold, but in a certain sense I made my own history to be able to do that and have that as an example for my students. And also history in a sense that I think I’m the only person that has done that in the roosterweight category at that age…

To compete at a high level into your 30s and beyond, Manuel emphasizes training with intelligence.

Age does really effect how you recover, the type of speed and strength you might have against a younger opponent. I’ve always been a huge proponent of the idea that you shouldn’t just train hard, you gotta train smart… I have intelligence. I have wisdom. I have experience. And that could be the equalizer. That’s what I always tell my guys. Yeah, age is a number, but just try to be smarter than the guy.

Manuel says that fatherhood changed not only how he teaches, but how he rolls with his students.

I notice a change in the way I teach at the academy and how I deal with my students because of fatherhood. There’s a different kind of care… There was a certain change in my approach to teaching and dealing with students at the academy that was a result of my experience as a father. Ultimately, that also changed the way I train… I had to learn how to be a competitor but still roll with people in a pleasant way so they could have a good time. Again, fatherhood played an important part in that because now my approach to the way I train or look at the students is more like a professor, sensei, father type of thing…

In his younger years, Manuel was an intense competitor. But when he returned to competition at Masters Worlds, he brought a much more positive, happy mindset. Manuel believes that this positive mindset is a reflection of true mastery.

When they see me out there, because I will compete again, they’re gonna see a happy Josef. Someone who is in a pleasant mode, super excited to be there… When we see those guys like that, not just me, when we see those guys at that level, that is a true sign of mastery. That you are so comfortable with your game and what you’re gonna do and the job you’re gonna execute, you don’t have to tap into some negative energy… I don’t have to beat him with this kind of energy. I gotta use technique. That’s why we train every day… to master technique, not master an emotion and go kill the guy.