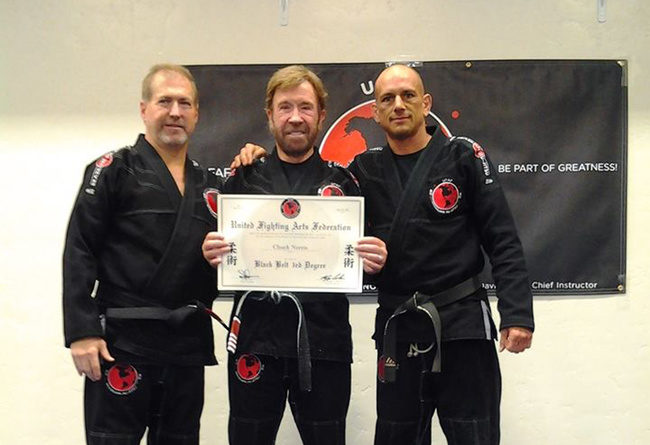 Any martial artist will know just how prestigious the black belt is, but especially in BJJ. On average it can take between 10-15 years to get your black belt in BJJ, meaning a lot of time, dedication and commitment has gotten you to that level. It’s always interesting when a celebrity has a black belt in a martial art, because the question arises: How do they find the time to do it? Here are 10 celebs who are all BJJ black belts, some you may already know, others might surprise you. So here they are, In no particular order…

The “Snatch” and “Sherlock Holmes” director and famous Madonna’s ex was awarded the his black belt by head coach Renzo Gracie in 2015 and is also a Judo black belt. Ritchie started training with his good friend Jason Statham around the same time, in the early 2000’s.

He does it all – from Fear Factor, to stand up comedy, to UFC commentating, to podcasts, to Jiu Jitsu! Rogan has been practicing martial arts all his life. He was a frequent Taekwondo competitor in his younger days. He’s also Black Belt in BJJ under Eddie Bravo’s 10th Planet Jiu Jitsu. In 2012, his first black belt was given to him by Bravo and then subsequently with a Gi (a martial arts uniform) by Jean Jacques-Machado.

Paul Walker was awarded his Brazilian jiu-jitsu black belt at his memorial service after he died in a horrific car accident. He was awarded a posthumous black belt from friend, coach and Paragon BJJ owner Ricardo Franjinha Miller. In his speech Miller spoke about Paul’s BJJ path saying, “I know he will reach it one day. So in his memory, I presented it to his dad at his memorial.”

The drummer of rock band Poison, is one of the highest-ranking BJJ celebrities as a 2nd-degree black belt. He trains under Renato Magno at Street Sports Brazilian Jiu-Jitsu. He’s been an avid student since 1998. He was awarded his black belt after 12 years of training.

Ed O’Neill, most commonly known for his role as Al Bundy in ‘Married With Children,’ is also a BJJ black belt. O’Neill trains at the Gracie Academy in Torrance, Calif. and received his black belt from the legendary Rorion Gracie. He was probably one of the first celebrities to get involved with BJJ, and started training all the way back in 1991 – before the first UFC ever existed.

Hawaii Five-0 and “Ocean’s Eleven” actor Scott Caan is a bona fide BJJ black belt, who was promoted in 2016 by his coach Marcus Vinicius after 15 years of training. Caan trains at Egan Inoue’s Grappling Unlimited Academy in Hawaii.

Mark Calaway (The Undertaker) – Yes, the WWE superstar and beast of a man earned his black belt from Rolles Gracie in 2011. Conflict somewhat surrounded the granting of his black belt. “Many within the BJJ community including renowned practitioner Joe Rogan derided Rolles. The criticism focused on the fact that the MMA star had never trained in the Gi or even attempted a submission within the octagon.” Facing that guy on the mats is a vercy scary thought though, even without the make-up.

Expect no less from Marvel’s Agent of Shield, Clark Gregg, a badass in and out of character. Gregg was awarded his BJJ black belt by Renato Magno in 2015 at Street Sports BJJ in Santa Monica, Calif.

So don’t f*ck with Chuck.