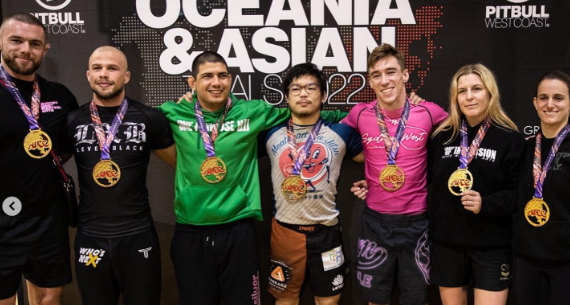 The final ADCC Trials event took place over the weekend, and seven more grapplers punched their ticket to the World Championships later this year in Las Vegas. Below are the gold medalists from the ADCC Asia and Oceania Trials.

Although the Asia and Oceania Trials receive considerably less fanfare than, say, the North American Trials, that doesn’t mean they were lacking in quality grapplers. In the past, these Trials events have produced some of the world’s top ADCC competitors, including 2019 ADCC absolute bronze medalist Lachlan Giles, as well as 2019 88 kg. silver medalist Craig Jones.

The Sydney West Martial Arts representative Josh Saunders is still a relative newcomer to submission grappling, but showed off excellent athleticism, takedowns, and top game throughout his run. In the final, Saunders earned a decision win over Daniel Schuardt on the strength of his relentless guard passing attempts and a near back-take.

The B-Team’s Izaak Michell is one of the fastest-rising stars in grappling. He was a brown belt no-gi world champion, is a current member of the Who’s Next cast, and is one of Craig Jones’ main training partners. Michell impressed in the final against Antonio Minenko, securing the back off a takedown attempt, then in the final minute of the match, a clean takedown directly into mount. Despite being undersized for the 99 kg. division, Michell proved to be one of the weekend’s top athletes.

One of the oldest Trials winners this year, Frias punched his ticket to the ADCC World Championships with a gritty performance in the final against Benjamin Hodgkinson. After trying every guard pass under the sun during regulation, Frias was finally able to score points in overtime when he took Hodgkinson’s back as the pair scrambled onto the hard gym floor, several feet off the mat.

Iwamoto looked like one of the tournament’s best wrestlers — a skillset that will serve him well as he competes in his first ADCC World Championships. In the final, Iwamoto took on Siraj Soufi in a high-paced, scramble-heavy match. In the final 30 seconds of their match, Iwamoto scored a takedown to secure the only points he needed to win.

Skinner showed off his devastating leg lock game all weekend, earning a 100% submission rate. In the final, he squared off with David Stoilescu, who was happy to play legs for essentially the entire match. That decision would be his undoing, though, as Skinner hit a kneebar in overtime to win gold.

Nikki Lloyd-Griffiths grappled at a torrid pace all weekend, and her final match against Gase Sanita was no exception. After wild exchanges on the feet and on the mat, Lloyd-Griffiths secured the back in the closing minutes of the match to score the only points needed to punch her ticket to the ADCC World Championships.

Fornarino showed off her dangerous closed guard in the final against a very scrappy Nadia Frankland. After Frankland pulled guard early, Fornarino found herself on bottom after a scramble. Fornarino was able to sweep directly to mount, though, and would hold onto that lead for the remainder of the match, surviving a late d’arce choke attempt from Frankland.