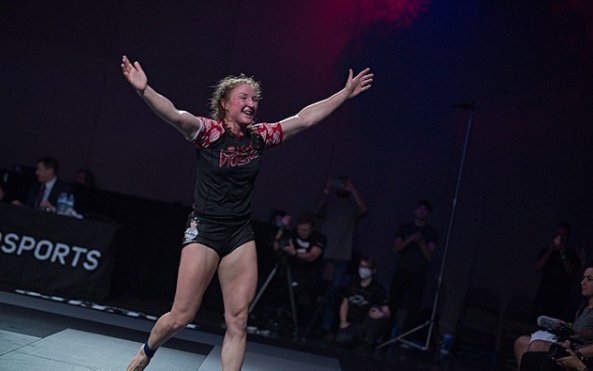 At the Who’s Number One (WNO) Championships on September 25, Amande Leve shocked the jiu-jitsu world with a dominant decision victory over four-time ADCC champion Gabi Garcia. Garcia was not only heavily favored to defeat Leve, but also favored to win the eight-woman tournament. Leve would have none of it, though, as she controlled much of the match, securing back control multiple times and sinking in deep rear-naked choke attempts. Watch Leve’s stunning performance at the WNO Championships here.

The win was one of the biggest upsets in the history of competitive jiu-jitsu, but according to Leve, everything went exactly as planned. In a recent episode of the Open Guardcast, Leve recapped her match against Garcia.

The evening before the match, Leve put together a strategy for dealing with Garcia, who held a massive size advantage over Leve and every other competitor in the division.

“That night we ended up going to the gym and just practicing a couple moves that we think would be beneficial for the match,” Leve said. “Literally, everything we did that night, we did in the match the next day… Literally everything happened exactly the way we planned it… It was absolutely insane how everything worked out so perfectly…”

Our whole gameplan was just to get to her back to begin with… I was not prepared for her not to tap to my rear-naked choke. I don’t think I’ve ever had a rear-naked choke so sunken in before, multiple times and not have them tap… It was just crazy how everything worked out in our favor and how we planned it.”

The 15-minute match took its toll on Leve, but that didn’t stop her from celebrating in the final few seconds of the match.

“We were five minutes into the match… and in my head I’m like, ‘oh my god I’m only five minutes in!’ So, that was physically so hard on me. So when I saw the eight seconds left, knowing all I just did, I just threw my hands up… I wish I could live that moment over and over again forever… When we walked back, I had competitors in the back clapping for me. That was super cool…

“I didn’t even really want to compete after that. My body feels like crap. Mentally I’m still not over this first win. So definitely it was hard mentally and physically to come back. Even the next day when we got to do wrestle backs, it was so hard to even walk in the morning. I was limping on my left leg. My whole body was killing me. It was just a super rough 15 minutes on my body.”