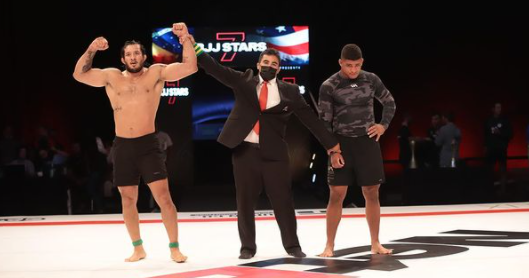 The main event was a no-gi affair. As expected, neither Barbosa nor Burns elected to sit to guard; both men have excellent wrestling and wanted to test it. Burns made the first serious move, nearly securing a takedown from a blast double leg. But Barbosa was able to defend and, in transition, get to Burns’ back. Barbosa wasn’t able to get his choking arm under Burns’ chin, but that didn’t matter, and Barbosa simply squeezed on Burns’ jaw and face to get the tap.

In the co-main event, Josh Hinger avenged a 2019 submission loss to Luis Marques in a gi match. Hinger found himself down two points early due to a Marques sweep, but was able to sweep back himself twice more, all while racking up advantages to win a clear but competitive points victory.

Also in action was 2019 ADCC champion Augusto “Tanquinho” Mendes, who used relentless top pressure and a handful of leg lock attempts to secure a decision victory over Bruno Frazatto. Additionally, Checkmat leader Leo Vieira impressed with a dominant 8-0 points victory over Cleber Luciano in a match that saw both men testing each other’s takedowns for the bulk of the match.