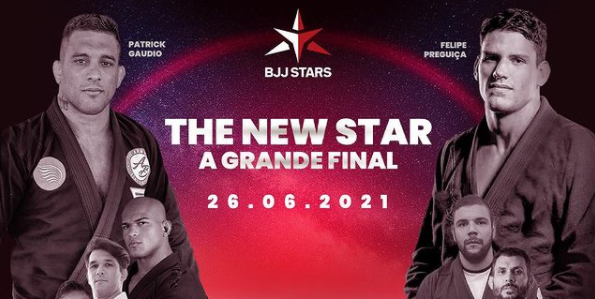 On Saturday, June 26, the Brazilian jiu-jitsu promotion BJJ Stars will return to action with a card stacked with top-level gi and no-gi matches. In the main event, Felipe Pena will defend his BJJ Stars heavyweight title against Patrick Gaudio. Lower on the card, many of the sport’s top competitors will be in action, including Lucas “Hulk” Barbosa, ADCC champions Matheus Diniz and Yuri Simoes, Mahamed Aly, and top black belt prospect Tainan Dalpra, among others.

An ADCC absolute champion and multiple-time IBJJF world champion, Felipe Pena won the BJJ Stars heavyweight title by defeating Luiz Pena, Erich Munis, and Gutemberg Pereira in one night earlier this year. Although Patrick Gaudio is the less-accomplished grappler, it would be silly to count him out of this match-up. A 2020 European Open champion, Gaudio holds impressive wins over Erberth Santos, Pereira, Lucas Barbosa, and Victor Hugo, among others.

The card also features a pair of intriguing no-gi match-ups. Matheus Diniz will square off with Atos representative Lucas Barbosa. The pair have met in competition many times, and although Diniz won their last encounter, it was Barbosa that won the first four. In other no-gi action, two-time ADCC champion Yuri Simoes will meet IBJJF gi and no-gi world champion Mahamed Aly. Both men are excellent takedown artists and guard passers, so look for Simoes and Aly to battle for position on the feet.

Lower still on the card is top Art of Jiu-Jitsu prospect Tainan Dalpra taking on Athos Miranda. Dalpra is less than a year into his black belt campaign, but is already considered one of the best competitors in the sport with wins over the likes of Matheus Luna and Michael Liera.

How to watch: BJJ Stars VI takes place on Saturday, June 26, and will air live on FloGrappling (subscription required).

Ben Coate has 549 posts and counting. See all posts by Ben Coate