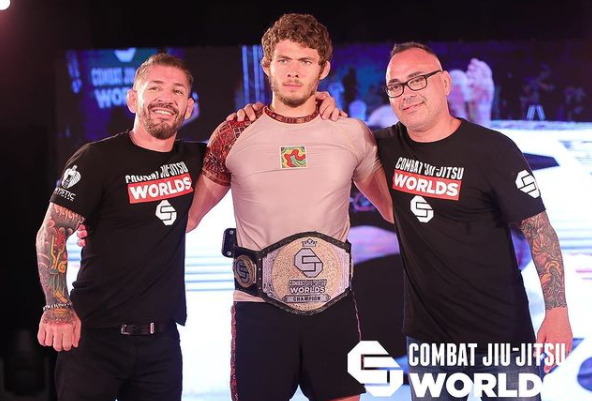 On Sunday, June 6, Eddie Bravo’s Combat Jiu-Jitsu (CJJ) Worlds returned to action with a 16-man welterweight tournament. Roberto Jimenez stole the show with four finishes inside regulation on his way to winning the CJJ welterweight title. View the full event results and highlights below.

A 21-year old black belt that has already made a big splash on the competitive grappling scene, Roberto Jimenez was an IBJJF no-gi world champion as a brown belt, and holds notable wins in jiu-jitsu over Dante Leon, Gabriel Almeida, and Tye and Kade Ruotolo. This was his first foray into combat jiu-jitsu.

In the first round, Jimenez made quick work of Adrian Madrid with a duck-under takedown, back-take, and arm triangle submission all in under 80 seconds. Next, Jimenez defeated UFC veteran Jim Alers with a classic triangle-armbar from closed guard. The semifinals saw Jimenez extended to his longest match of the night — a rear-naked choke win over accomplished MMA veteran JZ Cavalcante in just over three minutes.

And in the finals, Jimenez met 10th Planet standout and CJJ veteran Nathan Orchard. It was more of the same, though, as Jimenez secured a quick triangle choke and win by verbal submission. Jimenez’s run through the CJJ Worlds was one of the most dominant performances in CJJ history.