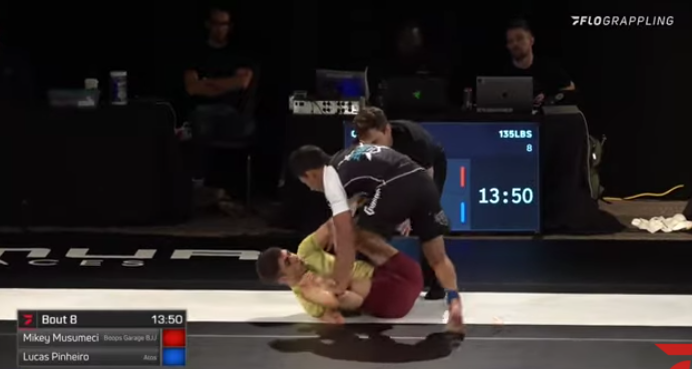 Mikey Musumeci is on a mission to establish himself as a force in the no-gi scene in 2021. After five years away from no-gi competition, the three-time IBJJF gi world champion has competed exclusively in no-gi this year, and exclusively under the Who’s Number One banner. On May 28, Musumeci appeared in his second no-gi match of the year when he took on 2020 Pans gi and no-gi champion Lucas Pinheiro. FloGrappling has now released that entire match for free; watch it below.

What we see here is a Musumeci that is entirely comfortable with leg entanglements and heel hooks. After sitting guard, Musumeci immediately enters to the k-guard to establish control of Pinheiro’s legs. Pinheiro escapes Musumeci’s first attempt to create a leg entanglement, but doesn’t get away on Musumeci’s second attempt, resulting in a heel hook finish in just under 90 seconds.

Since the win over Pinheiro, Musumeci put on a dominant performance against Junny Ocasio at another Who’s Number One event. He is scheduled to face 10th Planet standout Geo Martinez at The Road to ADCC on July 17.

Although Mikey Musumeci won his first black belt world championship in no-gi, he is best known for his gi game. He was a three-time world champion in the gi from 2017 through 2019, often relying on his berimbolo and ankle lock game.