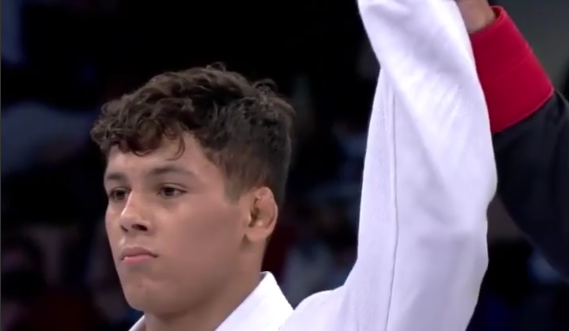 The Abu Dhabi World Pro Jiu Jitsu Championships (ADWPJJC) are well under way, as elite gi competitors went head to head in the main brackets today. Of note, 18-year old phenom Mica Galvao picked up one of the most impressive wins of his young career when he submitted accomplished Unity Jiu-Jitsu representative Levi Jones-Leary.

Galvao made quick work of Jones-Leary, submitting him in under two minutes. Watch that match below.

What we see above is Galvao at his best, using his opponent’s aggression against him to attack on the counter and ultimately finish the match with perfect submission mechanics. Jones-Leary is no slouch, either. An IBJJF European and Pans champion, Jones-Leary is widely known for his dangerous berimbolo game, and is coming off an impressive no-gi win at Who’s Number One over Oliver Taza.

Galvao has made a splash on the competition scene in 2021. In June, he won the Third Coast Grappling middleweight grand prix just one day after defeating Oliver Taza at Who’s Number One. He holds recent notable wins over the likes of Jacob Couch, William Tackett, and Pedro Marinho.

Galvao would win his next match, advancing him to the finals where he will square off with 2018 ADWPJJC winner Espen Mathiesen.

How to watch: The Abu Dhabi World Pro Jiu Jitsu Championships take place on November 14-19, and will air live on FloGrappling (subscription required).