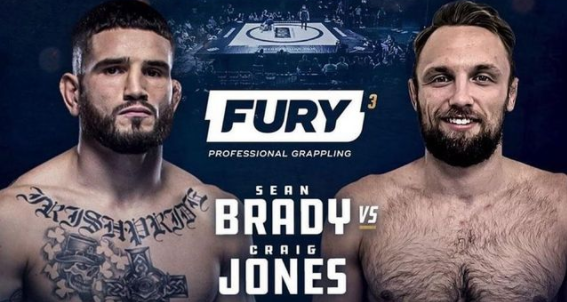 A former member of the Danaher Death Squad and current leader of the B-Team, Jones is one of the best pound-for-pound no-gi grapplers on the planet. He is undefeated in competition this year with wins over Ronaldo Junior, Luiz Panza, Tye Ruotolo, and ADCC champion Davi Ramos.

Brady sports a perfect 15-0 professional MMA record and is currently the no. 9-ranked welterweight in the UFC. Throughout his MMA career, the 29-year old Brady has shown that, while he is a well-rounded fighter, he does his best work on the mat. He is a BJJ black belt under Daniel Gracie and owns four submission wins.

In his most recent outing, Brady turned heads by using dominant wrestling and grappling to control fellow grappling specialist Michael Chiesa on his way to a unanimous decision victory.

How to watch: Fury Grappling 3 takes place on Thursday, December 30 and will air on UFC Fightpass (subscription required).