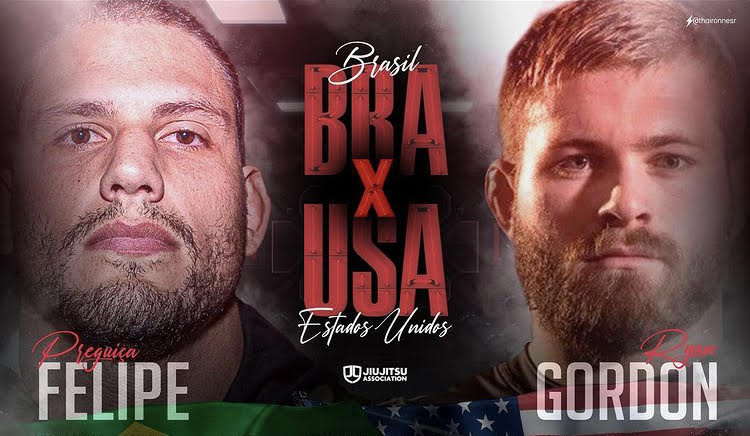 Grappling is a sport that is largely dominated by two countries: the United States and Brazil. Rarely, though, are competitions ever framed as country vs. country. So when top black belt competitor Isaque Bahiense posted the idea of a USA vs. Brazil grappling event, he piqued the interest of fans and competitors. One of those competitors was current no-gi pound-for-pound king Gordon Ryan, who responded to Bahiense’s suggestion as only Gordon Ryan can.

Don’t get too excited. Although this looks like an official event poster (and that event would be awesome), this is just fantasy matchmaking. That said, the idea gained steam as competitors chimed in on the idea.

Eventually, Ryan responded and, per usual, he is dripping with confidence.

Ryan not only accepts Bahiense’s idea of a country vs. country event, but takes it up a notch and offers to face Brazil’s top five grapplers back-to-back in no-time limit submission-only matches.

Would such an event ever happen? That seems unlikely. However, it’s worth noting that Bahiense holds a brown belt win over Ryan, so some light online trash-talking could be building toward a black belt rematch. Bahiense is coming off a points win at BJJ Stars 5 over Roberto Jimenez (who Ryan recently submitted at Who’s Number One).

It’s also worth noting that in Bahiense’s proposed event, Ryan would face Felipe Pena, who is the only man to hold two wins over Ryan. This talk could also lead to a third match with Pena, which might be the biggest match to be made in jiu-jitsu outside of Ryan vs. Andre Galvao.