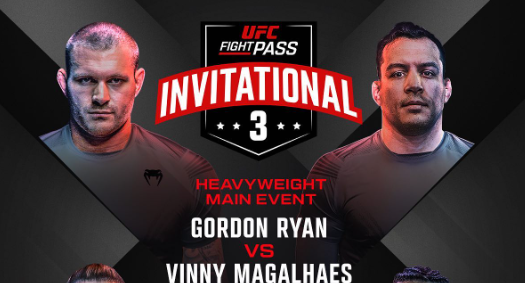 Gordon Ryan will take on Vinny Magalhaes in the main event of the UFC Fightpass Invitational 3.

Gordon Ryan is out to avenge every loss of his black belt career.

On Thursday, December 15, Ryan will have the opportunity to get back his most recent loss – a 2018 defeat on points to Vinny Magalhaes. The two elite black belts are set to square off in the main event of the UFC Fightpass Invitational 3.

Beyond those two matches, the card is set for an eight-man absolute tournament whose competitors have yet to be announced.

Widely considered the top pound-for-pound no-gi grappler in the world, Ryan is currently riding a nearly-five-year winning streak, capped by an incredible run through the 2022 ADCC World Championships that saw him winning gold in the heavyweight division (making him the first person to capture ADCC gold in three different weight classes), as well as defeating Andre Galvao to win the ADCC superfight title.

With his blend of complex leg locks, excellent wrestling, suffocating guard passing and top control, Ryan has looked well ahead of his competition over the past several years, racking up an impressively high submission rate.

Magalhaes, meanwhile, comes into this contest on a three-match losing skid that dates back to 2020, with the Brazilian focusing most of his efforts on his MMA career. A 2011 ADCC champion, Magalhaes competed at the 2022 ADCC World Championships, losing to John Hansen in the opening round. Before that, he dropped two straight in 2020 to Craig Jones and Mason Fowler, respectively.

Ryan and Magalhaes first met in 2018 at ACB JJ 13 in a points match scheduled for three five-minute rounds. In the opening round, Magalhaes scored a takedown and clean guard pass to score 5 points. That lead would carry him through the final two rounds, where he largely avoided Ryan’s trademark leg entanglements and butterfly sweeps.

How to watch: The UFC Fightpass Invitational 3 takes place on Thursday, December and will air live on UFC Fightpass (subscription required).