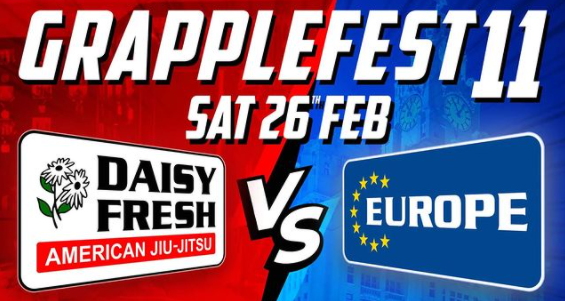 GrappleFest 11 takes place on Saturday, February 26, live from Liverpool, England. The event will showcase European grapplers taking on one of the US’s fastest-rising teams — Daisy Fresh (AKA Pedigo Submission Fighting). A number of elite grapplers will be in action, including Mikey Musumeci, Dante Leon, Ffion Davies, and Kendall Reusing.

The main event features 2019 no-gi world champion Dante Leon taking on Mateusz Szczecinski. At GrappleFest 10, Leon picked up a hard-earned decision victory over Oliver Taza, while Szczecinski dropped a decision to Pierre-Olivier Leclerc. Leon is an excellent wrestler with one of jiu-jitsu’s most dangerous guillotines, while Szczecinski is an advance leg locker and guard player, creating an interesting clash of styles.

And in the co-main event, recently-crowned Who’s Number One (WNO) 125-pound champion Ffion Davies will move up in weight to face 2019 no-gi world champion Kendall Reusing. Both women tend to do their best work on top and, for that reason, typically wrestle for takedowns on the feet. On paper, Reusing is the more accomplished and seasoned wrestler, so look for Davies to potentially play guard early.

View the current GrappleFest 11 line-up below:

How to watch: GrappleFest 11 takes place on Saturday, February 26 and will air live on Fite TV PPV.