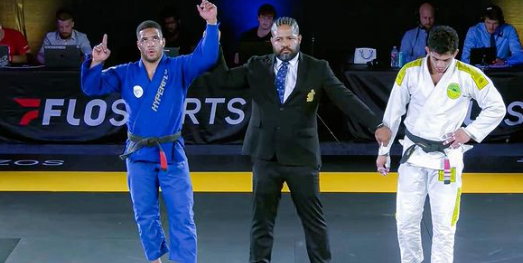 Just a week removed from his no-gi win over Mica Galvao at BJJ Stars 9, Bahiense continued his winning ways with a submission victory against Andre Porfirio in the opening/semifinal round.

And in the final, Bahiense squared off with no-gi world champion Manuel Ribamar. After battling for takedowns on the feet through the first half of the match, Ribamar had earned a penalty for passivity and pulled guard. From there, Bahiense earned an advantage for a near pass and, despite Ribamar’s best efforts, would remain in top position to secure the victory and grand prix championship.

The first-ever women’s grand prix saw Lebre upset Luiza Monteiro and Anna Rodrigues on her way to tournament gold. The Gracie Humaita product attacked Monteiro with her tricky and complex lapel guard, winning a battle of sweeps to secure the first-round victory.

In the tournament final, Lebre took on two-time world champion Rodrigues. Lebre wasted no time, scoring an early four points from a spectacular back-take to put Rodrigues on the defensive for the remainder of the match.

In superfight action, top pound-for-pound gi player Tainan Dalpra extended his streak of dominance as he made quick work of Rodrigo Lopes, showing off his trademark guard passing before securing a submission victory.

Alliance’s Fellipe Andrew took on recent ADCC veteran Roosevelt Sousa. Despite giving up 50 pounds of weight, Andrew attacked fearlessly in a high-paced, entertaining match. After both men hunted for their trademark footlocks, Andrew was able to secure the back position and a match-ending choke.