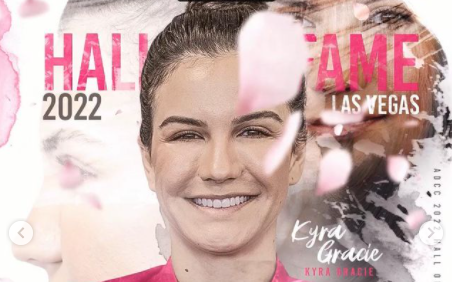 The ADCC continues to grow its official Hall of Fame. Joining a list of legendary competitors, ADCC world champions Kyra Gracie and Braulio Estima have been inducted into the ADCC Hall of Fame.

Kyra Gracie was the first female member of the Gracie family to find success as a world-class competitor. A black belt under her uncle Carlos Gracie Jr., Gracie used her relatively old-school style of jiu-jitsu to win three ADCC world championships (2005, 2007, and 2011).

Gracie also found ample success outside of no-gi competition, as well. She was a five-time IBJJF world champion and a two-time Pans champion in the gi.

Braulio Estima is one of the most respected figures in jiu-jitsu. He won double gold at the 2009 ADCC championships, submitting fellow hall-of-famers Marcelo Garcia and Andre Galvao along his way. And in IBJJF competition, Estima was a three-time world champion and a three-time European Open champion.

Many of Estima’s wins came by way of his trademark footlock — the “Estima lock.” He submitted Rafael Lovato Jr. with this lock in the semifinals of the 2009 ADCC championships.