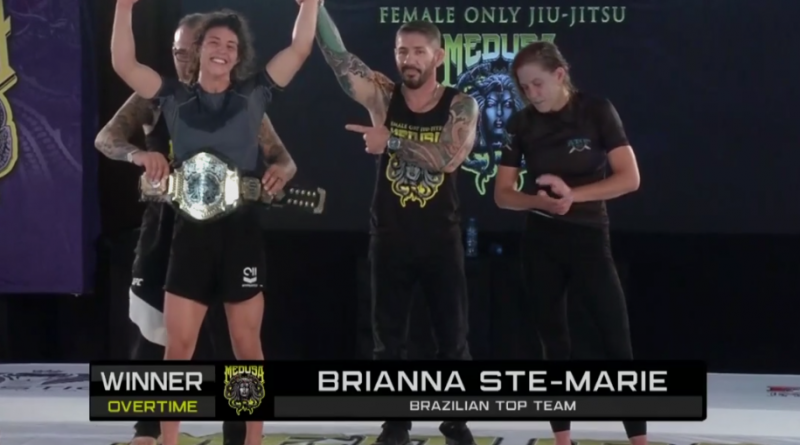 On Saturday, October 2, Medusa Jiu-Jitsu held its inaugural event. The card featured a pair of all-women tournaments — one at 115-pounds held under EBI rules, and one at 135-pounds held under combat jiu-jitsu (CJJ) rules. View the full results and highlights from Medusa 1 below.

In the first round, Kline made quick work of Samantha Villareal, latching on to a toehold early, getting the tap in just 24 seconds. Next, Kline squared off with UFC fighter Vanessa Demopoulos. Kline used excellent pressure passing, and after surviving a teepee choke attempt, she moved to side control, then to Demopoulos’ back, finally finishing an armbar with just under three minutes remaining in regulation.

The finals of the EBI tournament saw Kline taking on 16-year old phenom Trinity Pun. Early on, Kline looked to pass from the headquarters position. But about three minutes into the regulation period, Kline back-stepped into a kneebar that she quickly extended, securing the tap and the Medusa championship.

The CJJ tournament saw current CJJ flyweight champion Brianna Ste-Marie walk away a champion yet again on the strength of three submissions — two of which came during the regulation period.

In her opening match, Ste-Marie used a heavy pressure pass to move to mount on April Parks. From there, Ste-Marie landed heavy strikes, forcing Parks to turn to give up her back; Ste-Marie quickly sunk in the rear-naked choke for the tap. In the next round, Ste-Marie quickly pulled guard on Sophia Nordeno, worked a high guard to sink in a clean triangle choke, earning the submission in under 90 seconds, punching her ticket to the CJJ finals against Atos black belt Nikki Sullivan.

In the finals, Ste-Marie worked from the top position for much of the regulation period, defending Sullivan’s attempts to enter on the legs while landing an occasional ground strike. With two minutes remaining in regulation, Ste-Marie attacked from her closed guard, nearly securing an armbar before Sullivan was able to slip out. Ste-Marie ended the regulation period landing hard strikes while again chasing an armbar. In overtime, Ste-Marie secured an armbar finish in the second round, earning her the Medusa CJJ bantamweight title.