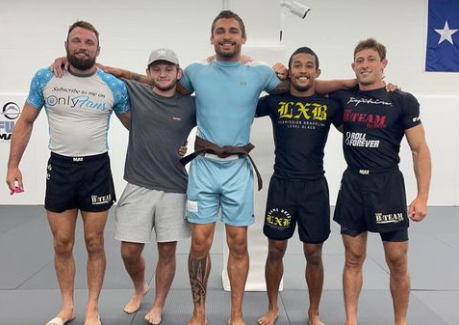 Few (if any) competitors have climbed to the top of submission grappling faster than Nick Rodriguez. In 2019, he earned silver at the ADCC World Championships as a blue belt after training in jiu-jitsu for just over a year. On Wednesday, Rodriguez was promoted to brown belt by his coaches and training partners at the B-Team in Austin, TX.

Rodriguez burst onto the scene in 2019 when he won the ADCC West Coast Trials and defeated former ADCC champions Orlando Sanchez and Roberto “Cyborg” Abreu to place second at the ADCC World Championships. Since then, Rodriguez has continued to compete and find success at the highest levels of submission grappling.

In early 2021, Rodriguez put on a guard passing clinic on former ADCC champion Yuri Simoes and followed that win up with a win over current Who’s Number One light heavyweight champion Pedro Marinho. In his most recent outing, Rodriguez suffered a disappointing loss to Checkmat brown belt Elder Cruz.

Rodriguez spent much of his early years in grappling training under John Danaher. After the Danaher Death Squad disbanded in 2021, Rodriguez announced his plans to join Jones, Crelisten, and Ryan in Austin to form the B-Team.