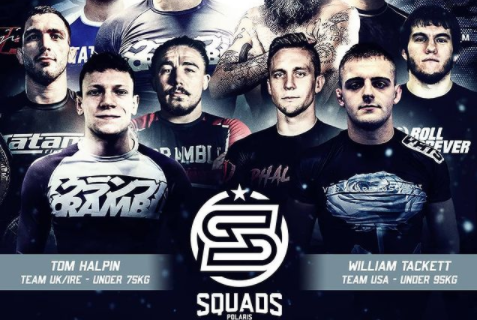 The rosters for the upcoming Polaris Squads event continue to fill in, as a handful of grapplers have been announced for the July 17 team grappling competition. The promotion recently announced the additions of PJ Barch and William Tackett to Team USA, and Bradley Hill and Tom Halpin to Team UK/Ireland.

Barch and Tackett are both regulars of the elite professional grappling scene in the United States, just as Hill and Halpin are to the European scene.

PJ Barch is a 10th Planet representative with a high-level wrestling base to complement his ever-evolving leg lock game. He recently won the Emerald City Invitational with four submissions, and is set to compete against Nicky Ryan at Who’s Number One on April 30.

William Tackett is a 19-year old jiu-jitsu phenom representing Checkmat and Brazilian Fight Factory. He is a well-rounded grappler, but tends to do his best work looking for leg entanglements from bottom position. He is also set to compete at Who’s Number One, where he will face Tye Ruotolo.

Bradley Hill is a Polaris superfight and Squads veteran, and is a two-time European Open champion. Despite his rather short stature, he’s known for his guard game and, in particular, his omoplatas.

Although Tom Halpin is Irish and has competed largely in Europe, he trains under and is a black belt under Roberto “Cyborg” Abreu of Fight Sports Miami. He is an ADCC trials winner and a multiple-time Polaris superfight and Squads veteran.

How to watch: Polaris Squads takes place on Saturday, July 17 and will air on UFC Fightpass.