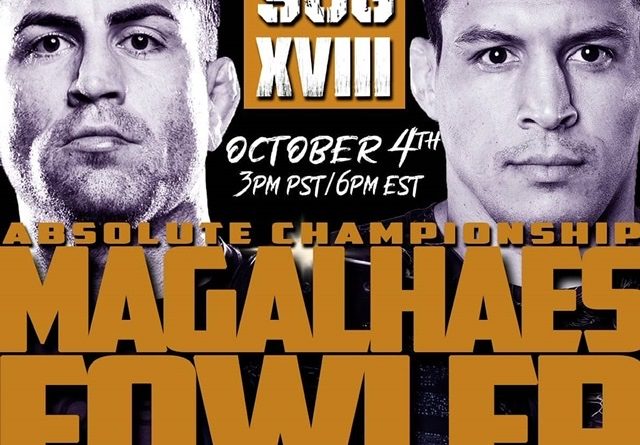 On SUG 18, Oct 4th, Mason Fowler will face ADCC champ Vinny Magalhaes in an attempt to defend his title. Fowler first gained the SUG title in July when he defeated Craig Jones in overtime. That was a controversial match. In it, Jones grunted while trying to escape a rear naked choke and the ref stopped the bout declaring Fowler the winner by verbal submission.

A few weeks later, Fowler and Jones grappled again. That also went to overtime. Fowler forced Jones to physically tap to the rear naked choke. After the match, fans were upset with Fowler for “playing to the rules”. I interviewed Fowler about this and posted the article on Reddit. Jones commented on that post, revealing that he was considering not accepting any more matches that included the EBI overtime rules. You can read about his response here.

Interestingly, Jones will be competing the same weekend but not in SUG. He is facing Roberto Jimenez on FloGrappling’s WNO event. Headlining this event is Gordon Ryan vs Matheus Diniz.

It’s been about 5 months since Magalhaes’ ankle injury during his match against Jones. We last saw Machalaes on SUG 13 in April. Early in the match Jones secured an inside heel hook and twisted Magalhaes’ ankle 180 degrees. Magalhaes escaped but then Jones put him back into it again shortly after. He escaped again but couldn’t continue because of the damage.

Here is what he had to say about the ankle after the match:

“To summarize what happened, the heel hook applied by Jones didn’t have the usual pressure on the ankle (mostly as a secondary pressure), and no pressure at all on the knee (most of the time the main concern). “When Craig went attacked the same foot for the second time, it freaked me out a little…The match was stopped when both of us were asking if it was worth continuing…”

Here is the full card: