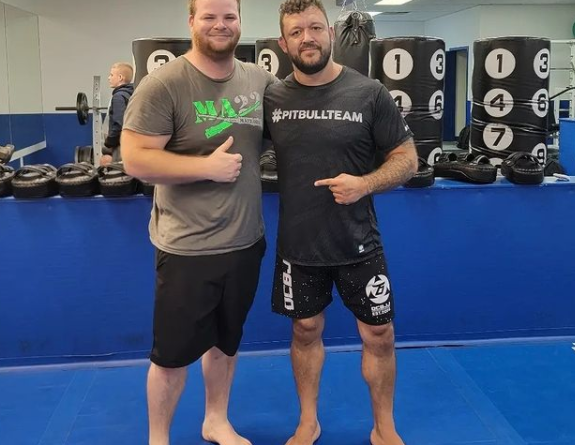 BJJ Legend Tom Deblass has invited the security guard from the Dillon Danis incident to train with him for free for the next year.

Why Did Dillon Danis End Up Getting Choked?

Last week, social media was dominated with a video showing former BJJ World Champion Dillon Danis being RNC’d by a security guard (Chance) on a night out. The 23-year old bouncer quickly got identified after the footage went viral and he opened up about his side of things on Instagram to MadnessMMA,

“I’m like, ‘Sorry, bro, you’re not getting in. I need an ID.’ And then he says, ‘Oh, you don’t know who I am?’” Chance recalled. “And I was like, ‘Sorry, dude, I don’t know who you are. I need an ID.’ So then he Googles himself and shows me the Google page, and I’m like, ‘That’s not an ID, bro. I need a driver’s license, passport, something so I know how old you are.’ After that he started getting a little agitated or whatever that I didn’t know who he was and stuff.”

“That’s when (Danis) is like, ‘Don’t touch me, don’t touch me,’ blah, blah,” Chance said. “While they’re having their whole conversation, I walk behind these guys. And that’s when Dillon tried to throw a punch. It wasn’t a great punch. He tried throwing a punch, missed it, and that’s when I grabbed him by his neck, pulled him down.”

“Usually whenever I do that, I’m legitimately choking you out for a second or two until you realize the situation you’re in. In the video, you see him tap and everything, and I was like, ‘You all right, man? You good?’ And he gives me like a little thumbs up, so I just bear-hugged him a little bit until the cops got everybody else under control and could give me a hand.”

Free Tickets to ADCC and Free Training for One Year

Since this incident, Chance has been offered to tickets to ADCC from No-Gi GOAT Gordon Ryan and now Tom Deblass has also stepped up and offered a years worth of free training with him at his gym. Deblass posted a pic of them together on Instagram captioned, In a post on instagram, Tom Deblass showed himself posing with his newest student, Chase the Bouncer.

“Pleasure to have the man of the hour @chance_3141 training with me now. Free year for my guy here. Chance is the bouncer that had Dillons back, the video went viral. I spoke to Chance and let me tell you, he looks for no trouble. He is kind and humble.

The story is Dillon showed up to his bar without an ID. Chance wouldn’t let him in so Dillon says “google me bro” and continues to pull up his instagram. Chance still wouldn’t let him in so Dillon got very offended and started aggressively going over the bouncers. Pleasure to have you with us brother, and if you have any haters tell them to meet you here:) @pitbullsports”