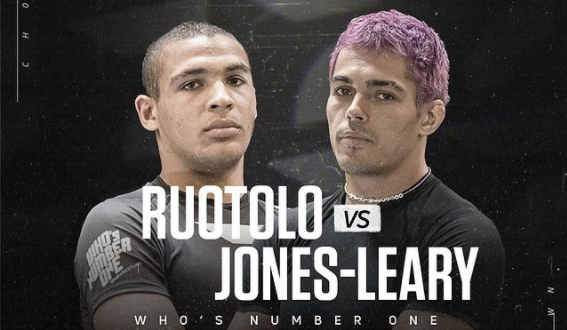 January’s Who’s Number One (WNO) event is slowly coming together, and it just added a second title match. Current WNO middleweight champion Tye Ruotolo will look to capture his second belt when he takes on back-taking master Levi Jones-Leary for the vacant welterweight title.

The event is scheduled for Friday, January 21. The main event will be light heavyweight title match between Craig Jones and Pedro Marinho.

FloGrappling announced the Ruotolo vs. Jones-Leary match-up on Instagram.

Tye Ruotolo was one of the sport’s top competitors in 2021. He captured the inaugural 185-pound WNO championship with impressive wins over Johnny Tama, Dante Leon, and Mica Galvao. Ruotolo’s lone loss this year came in a hard-fought decision loss to the significantly larger Craig Jones.

Unity Jiu-Jitsu’s Levi Jones-Leary is best known for his accomplishments in the gi, but has recently thrown himself into elite-level no-gi competition. In October, he impressed with a decision win over seasoned no-gi specialist Oliver Taza at WNO.

The match-up between Ruotolo and Jones-Leary seems like guaranteed fireworks. Despite a somewhat boring match against Galvao, Ruotolo has established himself as one of jiu-jitsu’s most fearless, aggressive, and unorthodox competitors. Much like his twin brother Kade, Ruotolo tends to do his best work on top, passing the open guard and setting up his trademark d’arce choke.

Levi Jones-Leary is one of the most technical competitors in the world. Known for his guard retention and seemingly unstoppable berimbolo, Jones-Leary put to bed any doubts if his game would translate to no-gi competition when he took Taza’s back in the opening minutes of their match.

This match will likely boil down to Jones-Leary attempting to slow down and ultimately secure the back of Ruotolo, while Ruotolo will aim to put the pace on Jones-Leary with the eventual goal of passing his guard or forcing an opening for the d’arce choke.

How to watch: Who’s Number One: Jones vs. Marinho will take place on Friday, January 21 and will air live on FloGrappling (subscription required).