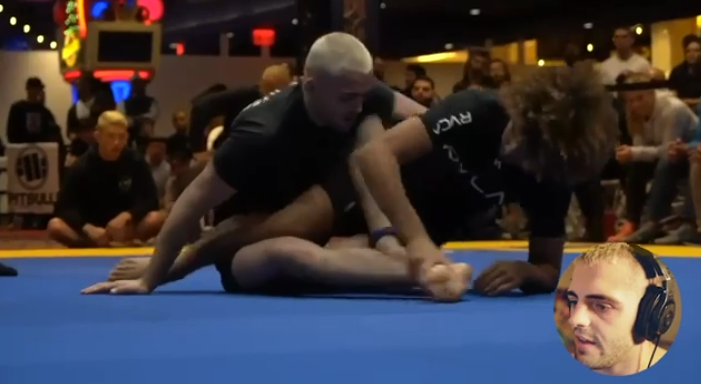 The 2021 ADCC East Coast Trials were the largest trials event to-date. With over 600 total competitors registered, it was also arguably the most difficult ADCC Trial ever, making Kade Ruotolo’s seven wins on his way to gold in the 77kg division all the more impressive.

In the finals, Ruotolo squared off with Brazilian Fight Factory representative William Tackett. Gracious and humble in defeat, Tackett recently narrated the key moments of his battle against Ruotolo in the finals of the ADCC East Coast Trials.

“This was an outstanding match, probably one of my favorite matches to-date because we were just going crazy,” said Tackett.

As are most Kade Ruotolo matches, this one was filled with scrambles, position changes, and unorthodox wrestling exchanges. During the regulation period, both Tackett and Ruotolo earned two-point sweeps, prompting an overtime period. In overtime, Tackett would shoot before pulling Ruotolo into his half guard, but time ran out before any points were scored.

Ultimately, Ruotolo was awarded the decision, punching his ticket to the 2022 ADCC Championships.

Tackett, who is likely to compete again at the ADCC West Coast Trials, reflected on his loss to Ruotolo.

“Really, really great match,” he said. “Again, my favorite match to-date, probably. We left it all out there. We were exhausted. At this point, the crowd is chanting ‘one more round,’ as in one more overtime round. And to be honest, I was hoping that. Even though I was exhausted and didn’t want to do another round, I was hoping we were, because I knew that I wasn’t going to win that decision because everything that happened at the beginning of the match was Kade… Next time, I got to go out there and fight a little harder towards the end and hopefully take that win.”