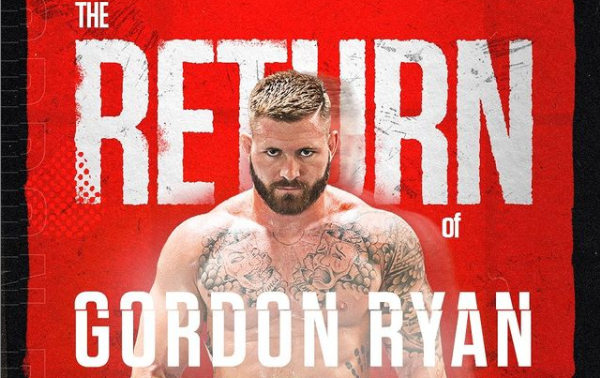 On October 20, top no-gi grappler Gordon Ryan will return to competition to face current UFC welterweight fighter Philip Rowe in what is being dubbed an “exhibition match.” That event will also feature a trio of Who’s Number One (WNO) title matches, as well as an entertaining match between recent ADCC trials winner Oliver Taza and berimbolo specialist Levi Jones-Leary.

In May, Ryan announced his indefinite leave of absence from competition, citing ongoing health concerns. According to Ryan, he still has not completely addressed those concerns, but he is nonetheless prepared to face Rowe in an exhibition match with special rules. Essentially, the match will be treated like a roll in the gym; after each and every submission, the Ryan and Rowe will simply restart on the feet.

Rowe does have some submission grappling experience — a pair of losses to Kody Steele and Gabriel Checco. On the other end of the spectrum, Ryan is widely considered the best pound-for-pound no-gi competitor in the world, and has not lost in competition since 2018.

Mesquita and Monteiro have a long history of competing against each other (in the gi). Most of those matches followed a similar pattern: Monteiro sits to guard, with Mesquita eventually finding success with her guard passing, typically after minutes of trying. Importantly, those matches were held under a points-based ruleset and in the gi. The 30-minute, submission-only, no-gi matches at WNO are an entirely different animal, and there are no guarantees that Mesquita will be able to repeat her earlier successes — or if she’ll even approach the match in the same way she has in the past.

In an intriguing style match-up, 2018 no-gi world champion Ffion Davies will take on 2020 no-gi world champion Nathalie “Tata” Ribeiro. Davies is a judo and guard passing specialist with notable wins over Nikki Sullivan, and Bia Mesquita, as well as a pair of wins in the gi over Ribeiro.

Ribeiro, on the other hand, tends to do her best work from her guard, but she has shown to have skills in all areas. Despite her losses to Davies, Ribeiro is the more experienced submission-only competitor, and holds a 2020 WNO win over Luiza Monteiro.

In what could be the night’s most entertaining contest, Unity Jiu-Jitsu’s Levi Jones-Leary will be making his WNO to take on recent ADCC European Trials winner Oliver Taza. Jones-Leary is a European Open and Pans champion, and is known for his high-level, relentless berimbolo and back-taking game. Those back-takes should make for an interesting match against Taza, who is one of the sport’s most dangerous leg lockers.

After a disappointing first-round submission loss at the WNO Championships, Mikey Musumeci is back to competing at his natural weight class, where he will take on ADCC veteran Richard Alarcon. After Musumeci’s red-hot start to 2021 with three WNO wins and a win at The Road to ADCC, he was understandably the favorite going into the WNO Championships. But after losing by submission to Gabriel Sousa, Musumeci will now try to get back on track.

Richard Alarcon is an excellent wrestler and a frequent no-gi submission-only competitor. Assuming Alarcon will want to attack from top position, he’ll have to avoid Musumeci’s relentless back and leg attacks, which he has used to great success in no-gi competition this year.

How to watch: WNO: The Return of Gordon Ryan takes place on Wednesday, October 20 and will air live on FloGrappling (subscription required).