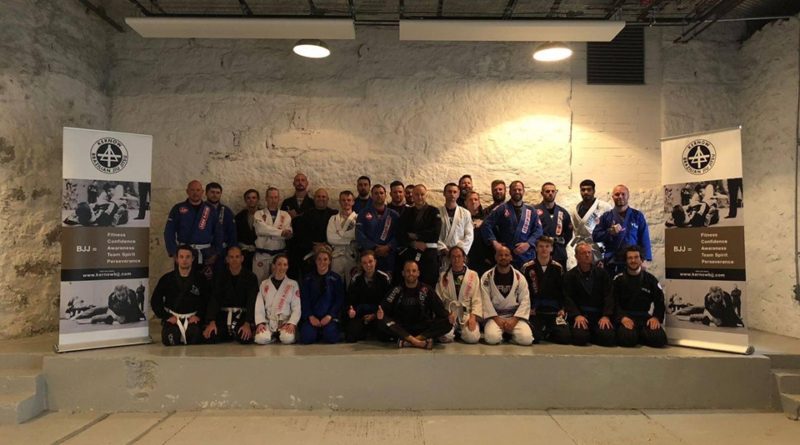 BJJ…it’s a weird sport/martial art/thing to do – isn’t it!? I’ll try and choke you unconscious, in return, we can be best mates? What d’ya reckon!?

Well, for Dan, that’s how he met his mate, Steve Crilly a 42-year-old Painter and decorator who lived in Cornwall.

Dan started roughly the same time as Steve – about 4 years or so ago. Both attained their blue belt together and both loved BJJ. Dan currently serves in the British Army as a colour sergeant and has ambitions to go to sergeant Major – or , as high as he can.  He told me all about his mate who seemed to be a proper ‘lads lad.’

Dan told me “Steve is just good bloke, a good mate, wherever I was in the world – he’d always be sending me ropey stuff of his phone! [Stuff that probably isn’t family or kid friendly] and he’d send me the sort of videos which is best viewed with the sound off!”

Dan went on and told me about Steve’s life event:

“I went to Canada, when he had his biopsy and I was going there for 11- 12 weeks, when I got back, we met at Costa and that’s where he broke the bad news… “

Steve went on to explain what he thought was Sciatica – wasn’t. It turned out to be Sarcoma Cancer. Sarcoma is cancer is located in the connective tissues, such as fat, tendons, bones, ligaments, nerves, blood vessels etc. These are more rare than carcinoma Cancers, which are more common. The problem lies with there being about 100 different sub-types of Sarcomas (https://sarcoma.org.uk)

Dan told me “Steve genuinely thought that this [what turned out to be cancer] was sciatica, he had ‘Sciatica’ for about 18 months and would spend ages stretching his legs out, doing yoga, even driving sometimes, he would say how his leg is playing up today etc.”

“Anyway – he went into hospital when I was away on exercise. When we are deployed on exercise, we have to treat it like war, so we’re not allowed our phone for 38 odd days. As soon as I got back, I had loads of missed calls, pics, memes, videos and all the usual funny content that he’d sent me, but about half way through he had sent me a message…it would prove to be his last message that he ever sent me, it read:

‘hey pal had the results come back and it was cancer – had a CT scan and it hasn’t spread – so within the next couple of weeks the tumor is being removed, I’ll have some radio therapy and then 4-6 weeks of therapy and I should be good to go again.’

“Steve had the operation to remove it as suggested, but rather than taking the amount of time they thought – 6-7 hours – it took closer to 14. He had two cardiac arrests, which they revived him on, and then it happened. He had organ failure due to major complications during his long time in theatre and here we are….”

You could tell at this point it is still very fresh in Dan’s mind, and he is still coming to terms with everything. I told him how it’s good to talk about these sorts of things. I was 21 when I lost my best mate – I still cry now about it – but talking about things, emotions and previous relationships can really help.

Dan told me about his funeral and how awesome it was:

“At his funeral, the pallbearers wore their club gi jackets, and his partners oldest son (Ethan) helped walk him in.  There were rugby lads from 20 years ago that turned up, school mates, BJJ friends, he was clearly a man that touched lots of lives which is a great testament to his character.”

“On the day, there people spilling outside as there were so many people there.”

Steve Crilly – 42, leaves a lovely family, Francesca (his partner), his little boy, Nate (5), stepson Ethan, and daughter Megan. He also had other children from a previous relationship and leaves 2 grand-kids.

This is where the BJJ community could really help!

Dan and Steve became best mates after meeting each other at Kernow BJJ.

“Doctors, builders, army – all walks of life – none of that matters when your trying to strangle each other”, Dan said, which couldn’t be truer.

He went on to say: “If there is any advice to be given – if you feel uncomfortable or ‘not quite right’ GO and see the doctor. There seems to be this culture, particularly with men, where they say ‘I’ll be ok’ and/or ‘I don’t need any help’ – if something isn’t right, go and get it checked out…”

The two seminars were held in honour of Steve’s life and any money raised was used for Cancer Research. Steve’s daughter spoke exclusively to myself and spoke to how lovely the BJJ community has been and urges people to go and get themselves checked out if they don’t feel ‘quite right’.

Dan, based in Tidworth, trains at 2 places, Xion Gym (Andover) and Kernow BJJ (Redruth). He wanted to tell me about the exciting seminars ran by legends of the game – Roberto Almeida and Dean Lister.  Both seminars were 3 hours of magic and was taught FREE of charge by their respected Professors. There was a £10 entry fee for both events, all the money of is going to Cancer Research, which has been requested by Steve Crilly’s family.

I spoke to Chris Duncan-Smith – Black belt who runs Xion Gym and asked him why he wanted to do the event.

“Dan is one of my students and was devastated by the loss of his friend, Steve. He really wanted to put on something, in Steve’s name. I’ve never had the good fortune in meeting him, but if it’s important to my student, then its important to me too.”

“I really wanted to do something, so reached out to my professor – Roberto Almeida – who agreed straight away. He came down, did the seminar free of charge, which is amazing. All the money raised has gone to cancer research and I hope that Steve’s family are okay, along with Dan, and anyone that knew Steve..”

The wonderful thing about BJJ is the community. You can walk into any gym and be welcomed. There are some that aren’t fans, but I like to believe that if I went up north or down south, or to the midlands, if I wanted to pop in for a ‘sesh’, I’d be welcomed (mostly).