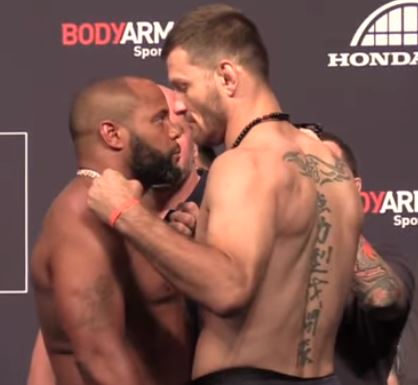 Miocic vs. Cormier 3 is happening. Today in an interview with Barstool Sports, Dana White gave us this important update on the heavyweight division. In setting up for a trilogy in the Stipe Miocic versus Daniel Cormier series, the UFC makes a “rubber match” that should garner plenty of attention.

There is no current timeline for the Miocic vs. Cormer 3. With Miocic having suffered some injuries in UFC 241, White said “we’re waiting for him to heal”.

Each fighter has one of the two fights in the series. Cormier defeated Miocic by KO in July 2018 to win the title belt. Miocic won the latest matchup (UFC 241) in August via TKO.

Miocic has set a target of breaking his own record of 3 title defenses. But surely the 40 year old Cormier has plans of his own.

Records are meant to be broken. I set the record defending my heavyweight title three consecutive times. I fully intend on being the same one to break that record. #SM pic.twitter.com/XSDj7Z1Hga

Neither fighter has commented yet on the potential fight.

You can review our other UFC coverage here.